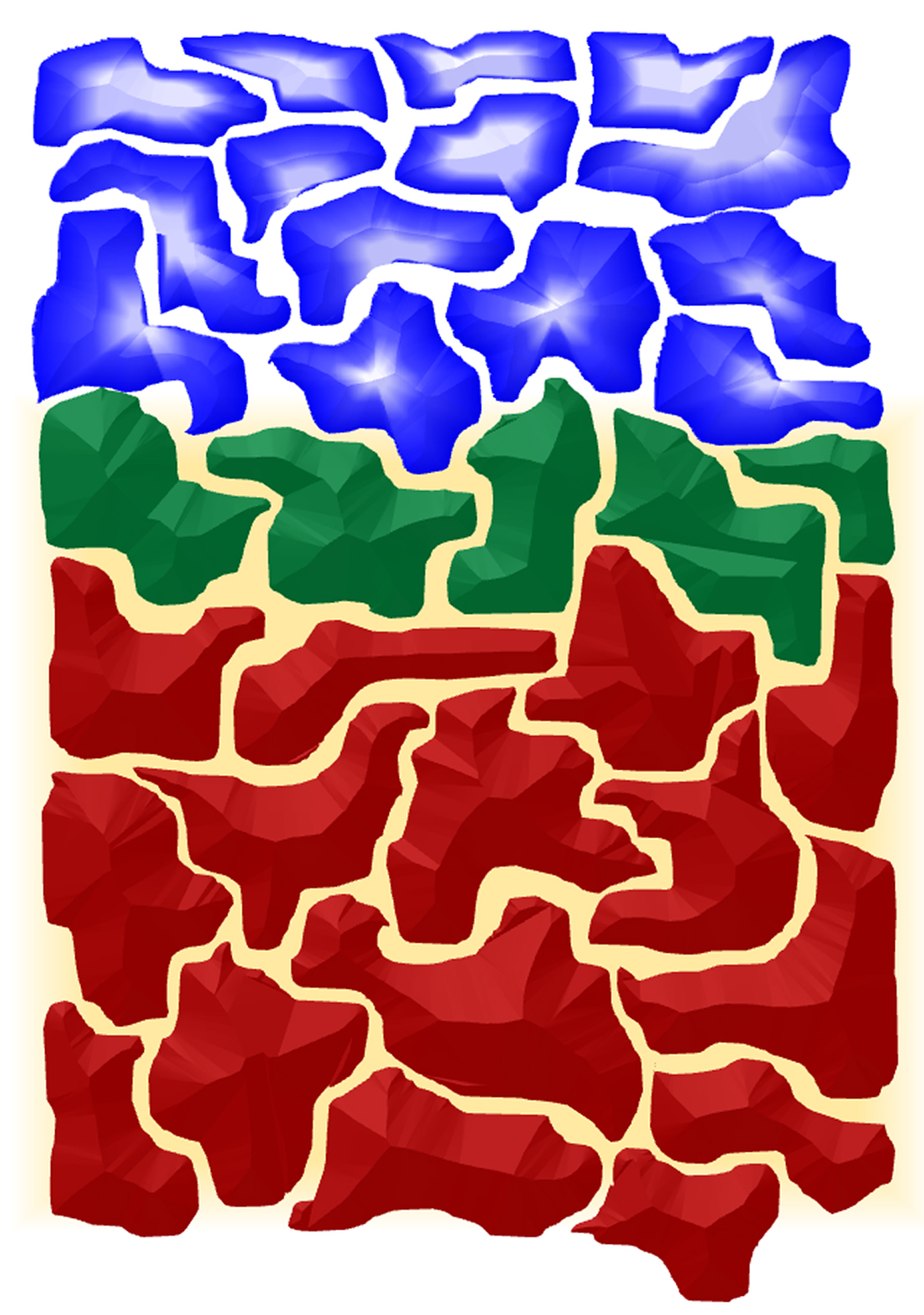 This magneto-ionic thin film, made primarily of aluminum oxide (red), gadolinium oxide (green) and cobalt (blue), allows oxygen ions to travel up and down through spaces between the layers when pushed by an electric field. Controlling the ions’ movement could be useful in computer memory storage and a host of other applications. The depth of the film depicted in this figure is on the order of 10 nanometers. (Credit: D. Gilbert/NIST)

There is a crack in everything, Leonard Cohen sang; that’s how the light gets in. Now a team led by scientists from the National Institute of Standards and Technology (NIST) has explored the properties of a promising class of materials with new capabilities that depend on those cracks. Their results could help open the way for practical applications from nonvolatile computer memory to quick-dimming windows.

The materials in question have been dubbed magneto-ionics—magnetic substances with properties that depend on the arrangement of ions, which are atoms with an electric charge. Computer memory designers like them because they work differently than traditional electronic devices, which depend on the movement of electrons to represent 1s and 0s. But electrons don’t stick around in traditional devices when the power dies.

Enter magneto-ionics, which are formed of several extremely thin layers of oxygen-containing crystalline particles stacked atop one another. These particles stack together, but have small gaps between them—allowing oxygen ions to move around among the particles. If layers of particles are set down as a thin film upon a surface, the ions can be moved up and down through the layers using an electric field, changing how they behave, even making magnetic layers lose their magnetism. Controlling whether the layers are magnetic or not potentially allows information storage as 1s and 0s. And once an ion moves to a new place, it tends to stay there, even without electricity.

Other nonvolatile memory technologies exist, most notably hard drives and flash memory, but they work relatively slowly, have relatively short lifetimes and cannot be scaled up past a certain point—hard drives, for example, can only have so many layers. Ionic technologies would also operate slowly, but would be more scalable.

The appeal of these magneto-ionic films goes far beyond data storage though, said NIST physicist Dustin Gilbert, because of the wide range of properties that can be changed by moving the oxygen ions around.

“Controlling oxygen distributions offers an opportunity to tune virtually every property of a material: magnetic, structural, optical, mechanical or chemical, to name a few,” Gilbert said. “So in a broad sense, you could imagine any number of devices where we apply a voltage and entirely change their functional behavior. One possibility would be a window coating that changes from opaque to mirrored or transparent, so that you could let in sunlight with the flick of a switch.”

Despite their broader potential, most of the research that has been performed up to now on magneto-ionics has been on extremely thin films just a few atomic layers thick. The NIST team set out to explore the behavior of the substantially thicker films that could be crucial for commercial applications.

Their research, performed using neutron reflectometry at the NIST Center for Neutron Research, turned up a number of findings useful for the industry’s future. Smaller particles, for example, tend to make for better magneto-ionic films, as there are more cracks through which the oxygen ions can travel. Also, changing the chemical makeup and crystal structure of the particles and layers changes the properties of the film dramatically, meaning that particle engineering will be a major concern for manufacturers.

Films’ properties also change after the oxygen ions make a few round-trips through the layers, raising questions about how long a device based on magneto-ionics could last.

“We need to be able to switch these things back and forth a huge number of times,” Gilbert said. “Their durability and speed is improving fast, but there’s still a way to go. By better understanding oxygen movement in these devices, our work should help a lot with that. We’ve cracked the underlying physics of these films’ magnetic properties, which should enlighten engineers about how they can use them.”