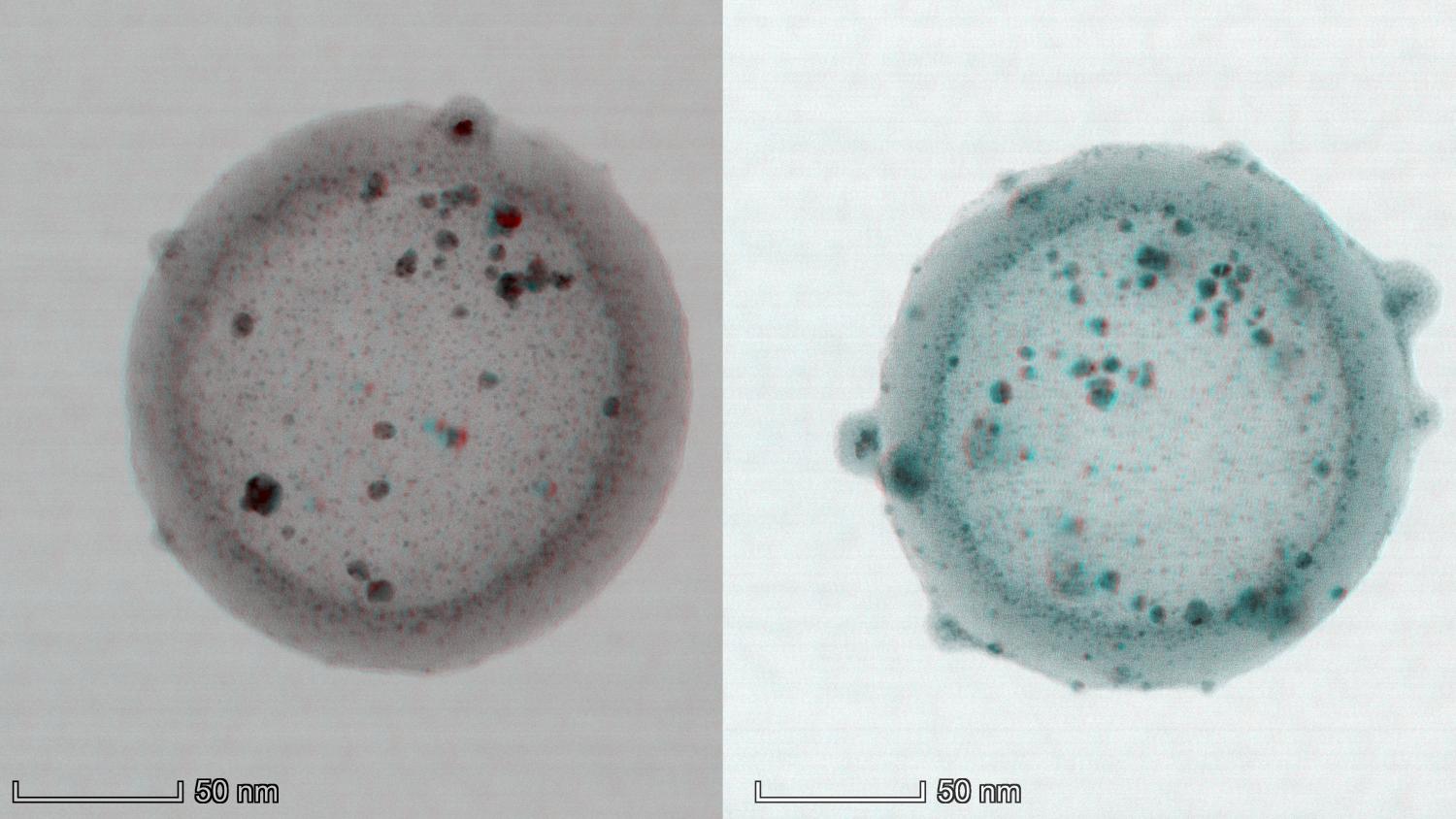 A superposed, tilt-less electron microscopy stereo image (color-filtered) of carbon nanospheres decorated with nanoparticles. The same structures appear in red and blue and the nanoparticles are slightly shifted according to their 3-D distribution in the carbon sphere. This image shows the applicability of the new tilt-less 3-D imaging techniques to other structures. (Credit: Cécile Hébert/Emad Oveisi/EPFL)

Physical and biological sciences increasingly require the ability to observe nano-sized objects. This can be accomplished with transmission electron microscopy (TEM), which is generally limited to 2D images. Using TEM to reconstruct 3D images instead usually requires tilting the sample through an arc to image hundreds of views of it and needs sophisticated image processing to reconstruct their 3D shape, creating a number of problems. Now, EPFL scientists have developed a scanning transmission electron microscopy (STEM) method that generates fast and reliable 3D images of curvilinear structures from a single sample orientation. The work is published in Scientific Reports.

The labs of Cécile Hébert and Pascal Fua at EPFL have developed an electron microscopy method that can obtain 3D images of complex curvilinear structures without needing to tilt the sample. The technique, developed by EPFL researcher Emad Oveisi, relies on a variation of TEM called scanning TEM (STEM), where a focused beam of electrons scans across the sample.

The novelty of the method is that it can acquire images in a single shot, which opens the way to study samples dynamically as they change over time. Furthermore, it can rapidly provide a “sense” of three dimensions, just like we would have with a 3D cinema.

“Our own eyes can see 3D representations of an object by combining two different perspectives of it, but the brain still has to complement the visual information with its previous knowledge of the shape of certain objects,” says Hébert. “But in some cases with TEM we know something about what shape the sample’s structure must have. For example, it can be curvilinear, like DNA or the mysterious defects that we call ‘dislocations’, which govern the optoelectronic or mechanical properties of materials.”

TEM is a very powerful technique that can provide high-resolution views of objects just a few nanometers across—for example, a virus, or a crystal defect. However TEM only provides 2D images, which are not enough for identifying the 3D morphology of the sample, which often limits research. A way around this problem is to acquire consecutive images while rotating the specimen through a tilt arc. The images can then be reconstructed on a computer to gain a 3D representation of the sample.

The problem with this approach is that it requires extreme precision on hundreds of images, which is hard to achieve. The 3D images generated in this way are also prone to artefacts, which are difficult to remove afterwards. Finally, taking multiple images with TEM requires shooting a beam of electrons though the sample each time, and the total dose can actually affect the sample’s structure during acquisition and produce a false or corrupted image.

In the STEM method developed by the researchers, the sample stands still while the microscope sends two beams of electrons tilted against each other, and two detectors are simultaneously used to record the signal. As a result, the process is much faster than previous TEM 3D imaging technique and with almost no artefacts.

The team also used a sophisticated image-processing algorithm, developed in collaboration with Fua’s CVlab, to reduce the number of images needed for 3D reconstruction to only two images taken at different electron beam angles. This increases the efficiency of data acquisition and 3D reconstruction by one to two orders of magnitude compared to conventional TEM 3D techniques. At the same time, it prevents structural changes on the sample due to high electron doses.

Because of its speed and immunity to problems with standard TEM methods, this “tilt-less 3D electron imaging” method is of great advantage for studying radiation-sensitive, polycrystalline, or magnetic materials. And because the total electron dose is reduced to a single scan, the method is expected to open up new avenues for real-time 3D electron imaging of dynamic material and biological processes.