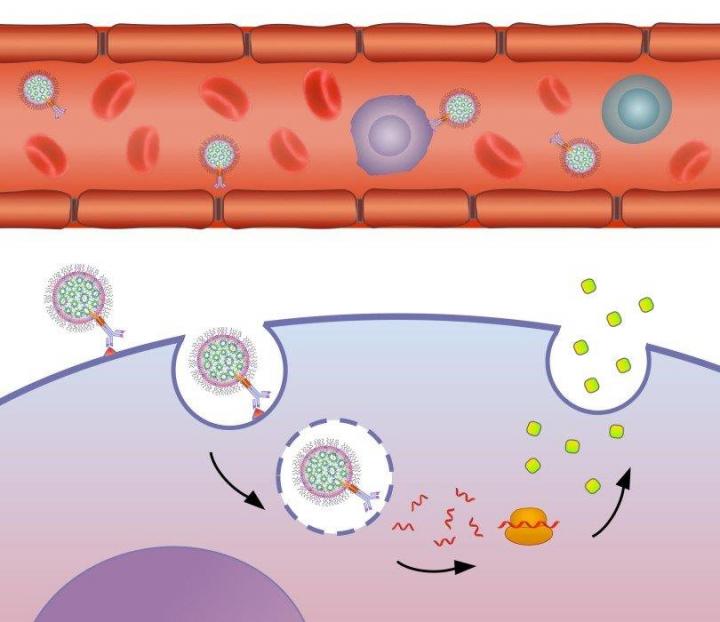 Schematic illustration of the mechanism by which the lab’s targeted nanoparticles modulate gene expression in the target cell. Credit: Nuphar Veiga/American Friends of Tel Aviv University

Delivering an effective therapeutic payload to specific target cells with few adverse effects is considered by many to be the holy grail of medical research. A new Tel Aviv University study explores a biological approach to directing nanocarriers loaded with protein “game changers” to specific cells. The groundbreaking method may prove useful in treating myriad malignancies, inflammatory diseases and rare genetic disorders.

Prof. Dan Peer, director of the Laboratory of Precision Nanomedicine at the School of Molecular Cell Biology at TAU’s Faculty of Life Sciences, led the research for the new study, which was conducted by TAU graduate student Nuphar Veiga and lab colleagues Meir Goldsmith, Yasmin Granot, Daniel Rosenblum, Niels Dammes, Ranit Kedmi and Srinivas Ramishetti. The research was published in Nature Communications.

Over the past few years, lipid carriers encapsulating messenger RNAs (mRNAs) have been shown to be extremely useful in altering the protein expressions for a host of diseases. But directing this information to specific cells has remained a major challenge.

“In our new research, we utilized mRNA-loaded carriers — nanovehicles carrying a set of genetic instructions via a biological platform called ASSET — to target the genetic instructions of an anti-inflammatory protein in immune cells,” says Prof. Peer. “We were able to demonstrate that selective anti-inflammatory protein in the target cells resulted in reduced symptoms and disease severity in colitis.

“This research is revolutionary. It paves the way for the introduction of an mRNA that could encode any protein lacking in cells, with direct applications for genetic, inflammatory and autoimmune diseases — not to mention cancer, in which certain genes overexpress themselves.”