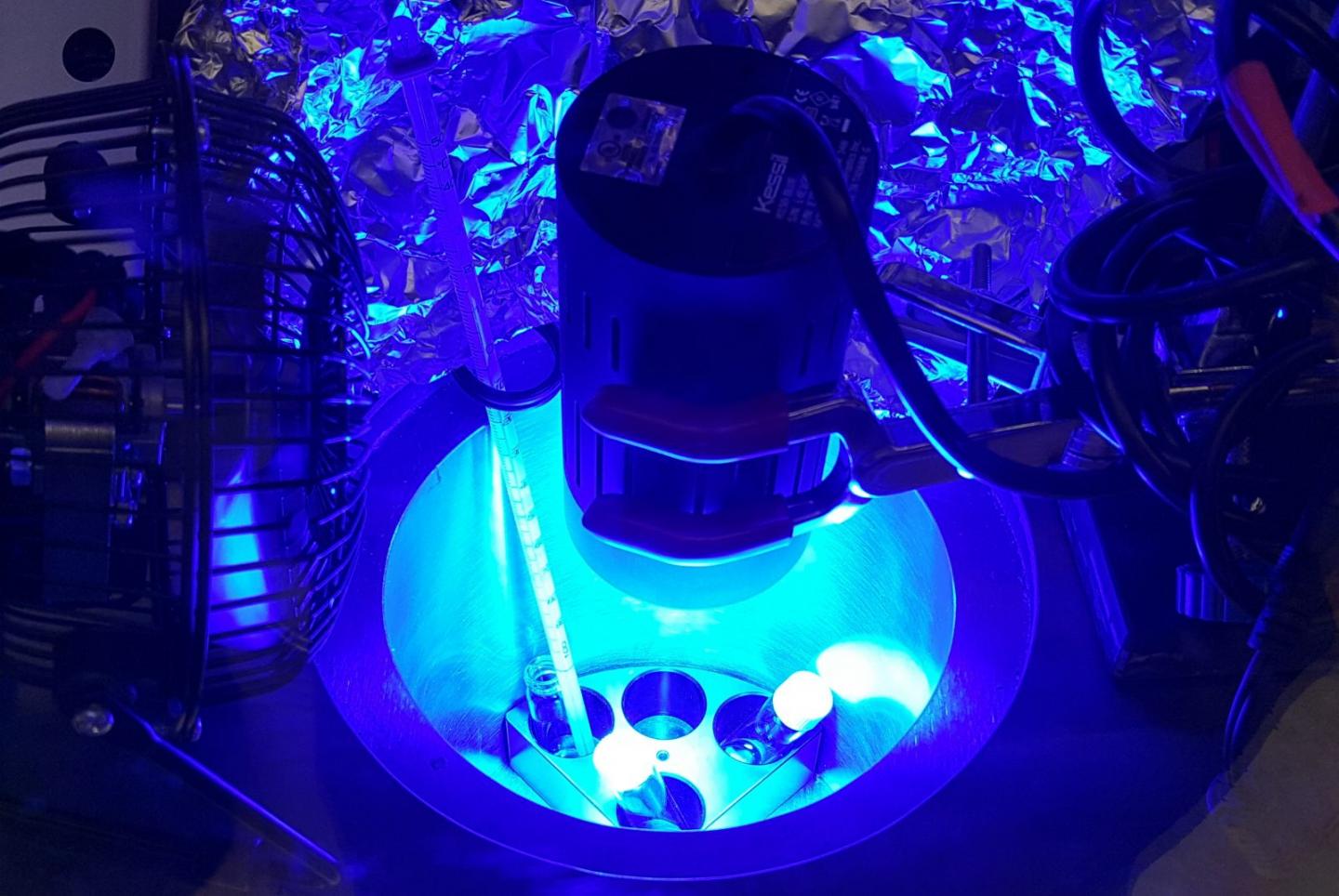 The setup of the photoredox polymerization in the glove box with a cold trap, irradiated by the blue LED light. Credit: Virginia Tech

As useful as polyolefins are in society, they continue to multiply as trash in the environment. Scientists estimate plastic bags, for example, will take centuries to degrade.

But now, researchers at Virginia Tech have synthesized a biodegradable alternative to polyolefins using a new catalyst and the polyester polymer, and this breakthrough could eventually have a profound impact on sustainability efforts.

Rong Tong, assistant professor in the Department of Chemical Engineering and affiliated faculty member of Macromolecules Innovation Institute (MII), led the team of researchers, whose findings were recently published in the journal Nature Communications.

One of the largest challenges in polymer chemistry is controlling the tacticity or the stereochemistry of the polymer. When multiplying monomer subunits into the macromolecular chain, it’s difficult for scientists to replicate a consistent arrangement of side-chain functional groups stemming off the main polymer chain. These side-chain functional groups greatly affect a polymer’s physical and chemical properties, such as melting temperature or glass-transition temperature, and regular stereochemistry leads to better properties.

Tong said his group has now found a way to create regular stereochemistry with polyesters.

“There’s no method available to do this kind of chemistry,” Tong said. “People have done similar work with polylactide before, but we’ve fundamentally shown that if we control the stereochemistry, the polyesters will have improved physical and chemical properties.”

Tong and his postdoc, Quanyou Feng, combined a new photoredox Ni/Ir catalyst — a surprisingly simple chemical process that uses a household light bulb to start the reaction — with a stereoselective Zn catalyst to initiate the ring-opening polymerization of the O-carboxyanhydride monomer to create these improved polyesters. The monomers can be conveniently polymerized within just a few hours with trace amounts of catalysts. The resulting material has a high molecular weight, thermal stability and crystallinity, and can degrade in basic water solution.

O-carboxyanhydrides are made out of amino acids, which are natural organic compounds, so these polyesters would degrade, unlike the current nondegradable polyolefins. In addition, O-carboxyanhydrides can bring different functional groups to the polyester and diversify the polymer’s application. Currently, the FDA has only approved a few polyesters for biomedical application. After finalizing the synthesis, Tong then worked with Guoliang “Greg” Liu, an assistant professor in the Department of Chemistry and fellow affiliated faculty member with MII, to show that the new polymers had improved properties.

“Dr. Tong’s lab has outstanding catalyst design and polymerization techniques, and we have excellent characterization and processing skillsets, so it’s natural for us to work together,” Liu said. “Controlling and proving tacticity is not a trivial process. Using differential scanning calorimetry and nuclear magnetic resonance, we provide strong evidence for the structure and properties that we’re going for.”

Developing these polyesters into applications is still down the line, but Liu said for now this is a significant advancement for materials research.

“This polyester synthesis that controls the tacticity can provide a new library of polymer materials that we haven’t had before,” Liu said.

This piece of innovative chemistry has Tong and Liu excited for a future that degradable and green plastics can be produced to replace today’s petroleum plastics that persist in landfills and oceans for decades or centuries.

Tong mentioned that this new polymer synthesis technology has been demonstrated only at the academic lab scale. There is still much work to be done to characterize these functional materials and perfect the patent-pending synthesis scale-up process.

“It would be our dream to see these degradable polyesters materialize in the marketplace, for both the plastic industry and biomedical application,” Tong said.