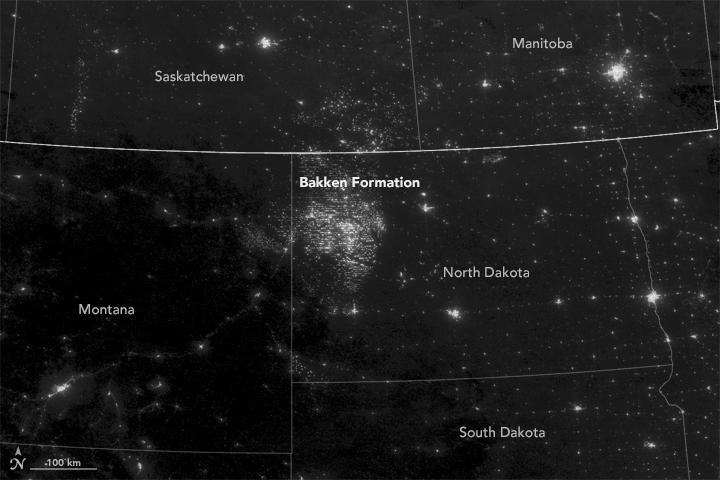 Jean-Sabin McEwen knocks out a web search for “North Dakota,” “night sky” and “flaring,” and quickly finds a picture from space showing a glowing cluster bigger than Minneapolis. It’s from oil and gas fields burning off methane, producing as much greenhouse gas in a year as 1 million cars.

“It’s a big problem because not only do you waste energy, but you produce CO2,” says Su Ha, a Washington State University associate professor of chemical engineering and director of the O.H. Reaugh Laboratory for Oil and Gas Research. “So the question is: Is there something you can do better than that?”

Ha and McEwen, a WSU assistant professor of chemical engineering, say they have a solution: a small reactor that inexpensively breaks water and methane into carbon monoxide and hydrogen, which can be used for energy and industrial products. They report their discovery in the journal ACS Catalysis.

Methane, the primary component of natural gas, is a frequent byproduct of oil drilling. It is also a greenhouse gas 34 times more potent than carbon dioxide over the course of a century.

Piping it from remote areas is expensive, so energy companies burn off about one-third of the gas they produce in bright flares that can be seen from space. U.S. and Russian researchers in 2015 said flares around the planet accounted for 3.5 percent of the world’s natural gas consumption.

McEwen and Ha’s solution involves breaking down the methane in the field.

Ordinarily, methane is such a tightly bonded molecule that breaking it apart requires a lot of water and temperatures of about more than 1,800 F. But McEwen and Ha found that they could use much lower operating temperatures and an inexpensive nickel catalyst in the presence of an electrical field to orient methane and water in a way that makes them easier to break apart.

At the end of the process, the researchers end up with carbon monoxide and hydrogen, the ingredients of syngas, or synthetic gas. The product can be used to make gasoline, or the reactor could be attached to fuel cells that convert and store the energy as electricity.

“The idea is to have something that is better suited to these remote areas than a large-scale reactor,” said McEwen.