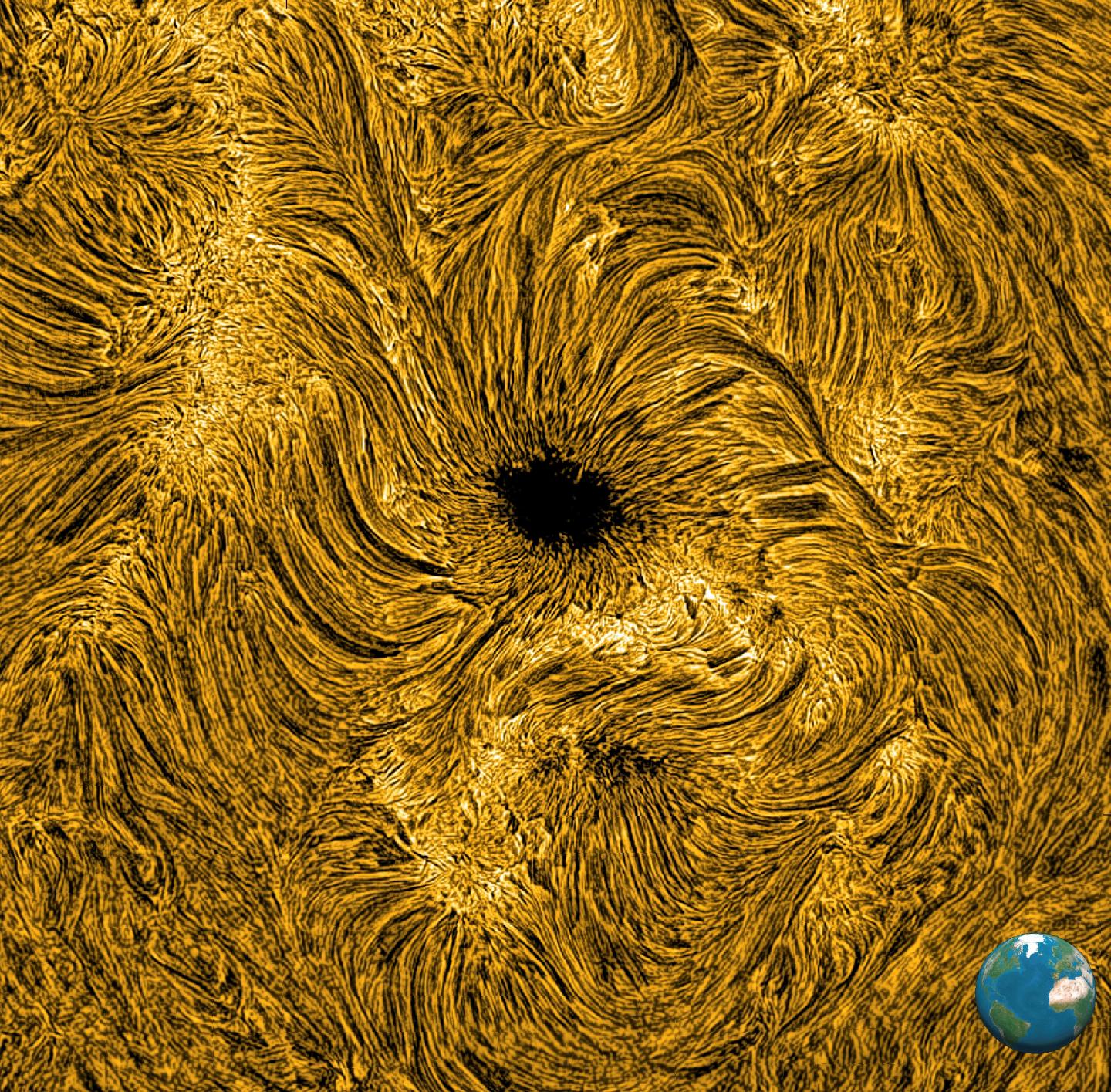 A view of a sunspot on the solar surface, visible here as a dark collection of plasma with magnetic field strengths similar to those found in modern hospital MRI machines. However, it is the size of the sunspot, which is comparable to that of our own Earth (see the scale Earth depicted in the lower-right corner), that gives these structures immense power and energy. The recent work published in Nature Physics reveals first-time evidence for how a rare breed of magnetic waves, which originate within the centre of sunspots, can form shockwaves that heat the surrounding plasma by thousands of degrees.

Scientists at Queen’s University Belfast have led an international team to the ground-breaking discovery that magnetic waves crashing through the Sun may be key to heating its atmosphere and propelling the solar wind.

The Sun is the source of energy that sustains all life on Earth but much remains unknown about it. However, a group of researchers at Queen’s have now unlocked some mysteries in a research paper, which has been published in Nature Physics.

In 1942, Swedish physicist and engineer Hannes Alfvén predicted the existence of a new type of wave due to magnetism acting on a plasma, which led him to obtain the Nobel Prize for Physics in 1970. Since his prediction, Alfvén waves have been associated with a variety of sources, including nuclear reactors, the gas cloud that envelops comets, laboratory experiments, medical MRI imaging and in the atmosphere of our nearest star – the Sun.

Scientists have suggested for many years that these waves may play an important role in maintaining the Sun’s extremely high temperatures but until now had not been able to prove it.

Dr David Jess from the School of Mathematics and Physics at Queen’s University Belfast explains: “For a long time scientists across the globe have predicted that Alfvén waves travel upwards from the solar surface to break in the higher layers, releasing enormous amounts of energy in the form of heat. Over the last decade scientists have been able to prove that the waves exist but until now there was no direct evidence that they had the capability to convert their movement into heat.

“At Queen’s, we have now led a team to detect and pinpoint the heat produced by Alfvén waves in a sunspot. This theory was predicted some 75 years ago but we now have the proof for the very first time. Our research opens up a new window to understanding how this phenomenon could potentially work in other areas such as energy reactors and medical devices.”

The study used advanced high-resolution observations from the Dunn Solar Telescope in New Mexico (USA) alongside complementary observations from NASA’s Solar Dynamics Observatory, to analyse the strongest magnetic fields that appear in sunspots. These sunspots have intense fields similar to modern MRI machines in hospitals and are much bigger than our own planet.

Dr Samuel Grant from Queen’s comments: “By breaking the Sun’s light up into its constituent colours, our international team of researchers were able to examine the behaviour of certain elements from the periodic table within the Sun’s atmosphere, including calcium and iron.

“Once these elements had been extracted, intense flashes of light were detected in the image sequences. These intense flashes had all the hallmarks of the Alfvén waves converting their energy into shock waves, in a similar way to a supersonic aircraft creating a boom as it exceeds the speed of sound. The shock waves then ripple through the surrounding plasma, producing extreme heat. Using supercomputers, we were able to analyse the data and show for the first time in history that the Alfvén waves were capable of increasing plasma temperatures violently above their calm background.”