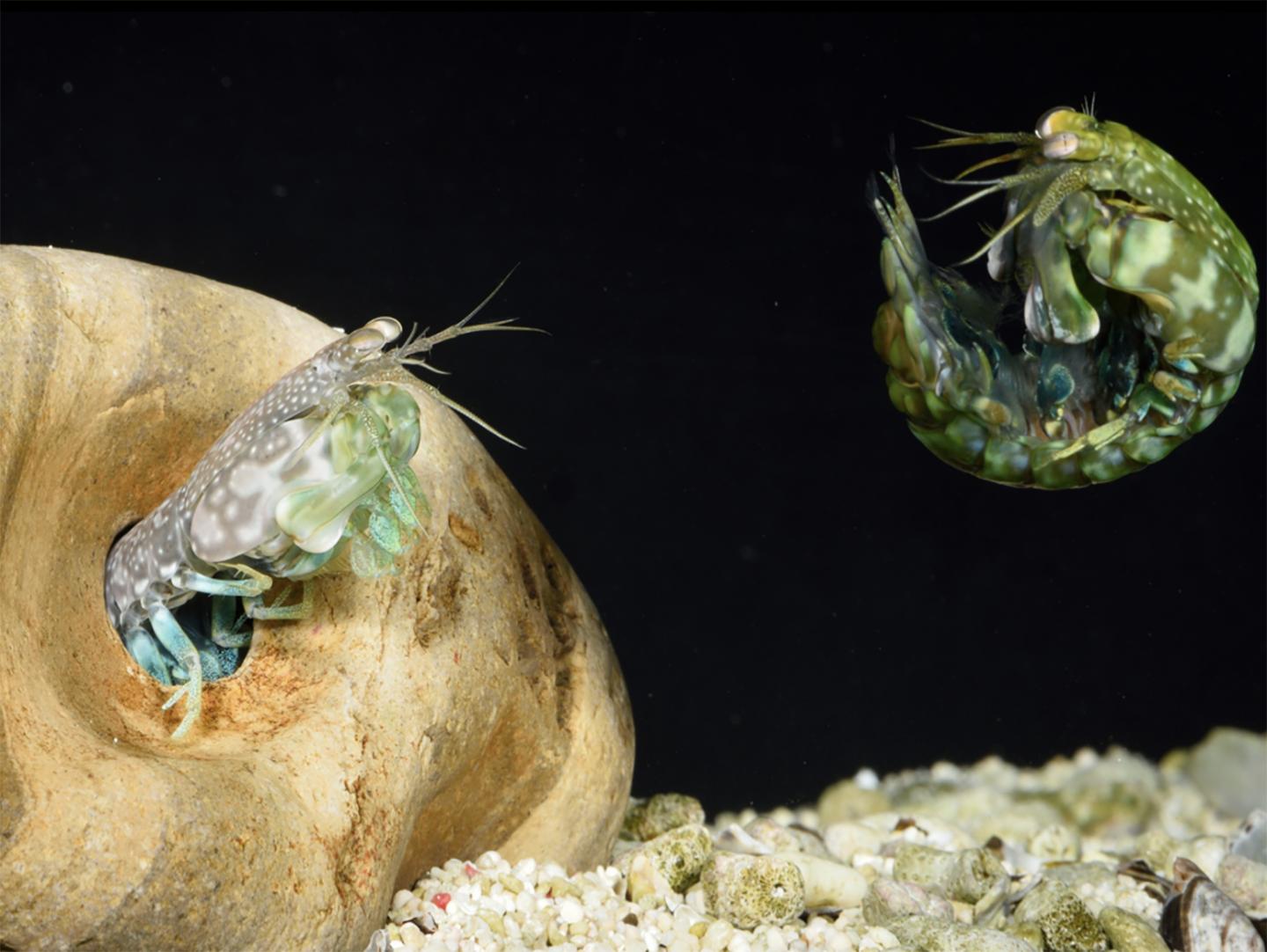 The mantis shrimp can fight itself without getting injured. Researchers are mimicking the tail segment structures that make this possible. Credit: University of California, Berkeley image/Roy Caldwell

The mantis shrimp, one of the ocean's most ornery creatures, can take on attacks from its own species without getting injured. Its strategy could solve a big manufacturing problem: Creating lighter materials that absorb a lot of energy from a sharp impact within a limited amount of space.

Think precious cargo. What if there were a material that could prevent car ceilings from caving in on passengers during an accident, or fragile objects from breaking when transported over long distances?

The mantis shrimp's secret is its tail appendage, called a telson. Engineers have now discovered what allows the telson to absorb the blows of its feisty self, with the goal of applying these lessons to protective gear.

The work, published in the journal Advanced Functional Materials, was performed by a team of researchers including David Kisailus' lab at the University of California, Riverside and Pablo Zavattieri's lab at Purdue University.

A telson can be shaped either as a territorial shield for "smasher" species or as a burrowing shovel for "spearer" species that also stabs prey. The researchers found out how the telson of the smasher, compared to that of the spearer, is better at protecting the mantis.

Their findings reveal that the smasher telson has curved ridges called carinae on the outside and a helicoidal structure shaped like a spiral staircase on the inside. UC Riverside ran tests on both the mantis shrimp itself and 3D-printed replicas of the telson, showing that the carinae both stiffen a smasher's shield and allow it to flex inward.

Together with the helicoidal structure, which prevents cracks from growing upon impact, the shield absorbs significant amounts of energy during a strike without falling apart.

Purdue researchers validated the role of carinae through computational models, simulating the attacks of one mantis against the telson of another. They even "invented" species with features between the smasher and spearer to evaluate which telson offered the best protection for the animal.

"We started with the telson of the spearer and gradually added features that start looking like the smasher," said Zavattieri, a professor of civil engineering at Purdue. A YouTube video is available at https://youtu.be/bXEfWqXyvfA.

"The smasher shield is clearly more ideal for preventing impact from reaching the rest of the body, which makes sense because the mantis has organs all the way to its tail," he said.

Zavattieri and Kisailus, a professor of chemical and environmental engineering and the Winston Chung Endowed Chair of Energy Innovation at UC Riverside, had previously observed the same helicoidal structure in the dactyl club appendage of the smasher mantis, which strikes a telson with the speed of a .22 caliber bullet.

"We realized that if these organisms were striking each other with such incredible forces, the telson must be architected in such a way to act like the perfect shield," Kisailus said. "Not only did the telson of the smasher contain the helicoid microstructure, but there were significantly more energy-absorbing helicoidal layers in the smashing type than the spearing type."

Zavattieri's group has already begun incorporating the crack propagation mechanisms of arthropod exoskeletons into 3D-printed cement paste, a key ingredient of the concrete and mortar used to build various elements of infrastructure. His lab plans to also try out advantageous structures from the mantis shrimp.

But there are still more clues to uncover about all that carinae and helicoidal structures have to offer, the researchers say, as well as how to manufacture them into new materials.

"The dactyl club is bulky, while the telson is very lightweight. How do we make protective layers, thin films and coatings for example, that are both stronger and lighter?" Zavattieri said.