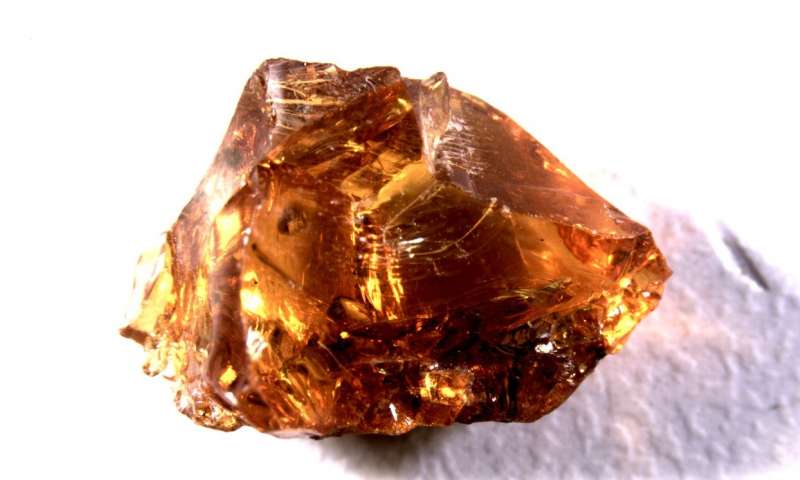 Amber and other unusual materials such as jade, obsidian and rock crystal have attracted interest as raw materials for the manufacture of decorative items since Late Prehistory and, indeed, amber retains a high value in present-day jewellery.

‘Baltic’ amber from Scandinavia is often cited as a key material circulating in prehistoric Europe, but in a new study published today in PLOS ONE researchers have found that amber from Sicily was travelling around the Western Mediterranean as early as the 4th Millennium BC—at least 2,000 years before the arrival of any Baltic amber in Iberia.

According to lead author Dr. Mercedes Murillo-Barroso of the Universidad de Granada, “The new evidence presented in this study has allowed the most comprehensive review to date on the provision and exchange of amber in the Prehistory of Iberia. Thanks to this new work, we now have evidence of the arrival of Sicilian amber in Iberia from at least the 4th Millennium BC.”

“Interestingly, the first amber objects recovered in Sicily and identified as being made from the local amber there (known as simetite) also date from the 4th Millennium BC, however, there is no other evidence indicating direct contact between Sicily and Iberia at this time.”

“Instead, what we do know about are the links between the Iberian Peninsula and North Africa. It is plausible that Sicilian amber reached Iberia through exchanges with North Africa. This amber appears at southern Iberian sites and its distribution is similar to that of ivory objects, suggesting that both materials reached the Iberian Peninsula following the same or similar channels.”

Senior author Professor Marcos Martinón-Torres, of the Department of Archaeology, University of Cambridge adds, “It is only from the Late Bronze Age that we see Baltic amber at a large number of Iberian sites and it is likely that it arrived via the Mediterranean, rather than through direct trade with Scandinavia.”

“What’s peculiar is that this amber appears as associated with iron, silver and ceramics pointing to Mediterranean connections. This suggests that amber from the North may have moved South across Central Europe before being shipped to the West by Mediterranean sailors, challenging previous suggestions of direct trade between Scandinavia and Iberia.”

Murillo-Barroso concludes, “In this study, we’ve been able to overcome traditional challenges in attempts at assigning corroded amber to a geological source. These new analytical techniques can be used a reference to identify Sicilian amber, even from highly deteriorated archaeological samples.”

“There are still unresolved issues to be investigated in the future—namely exploring the presence of amber in North African contexts from the same time period and further researching the networks involved in the introduction and spread of Baltic amber in Iberia and the extent to which metals or other Iberian commodities were provided in return.”

‘Amber in prehistoric Iberia: New data and a review’ is published in PLOS ONE.