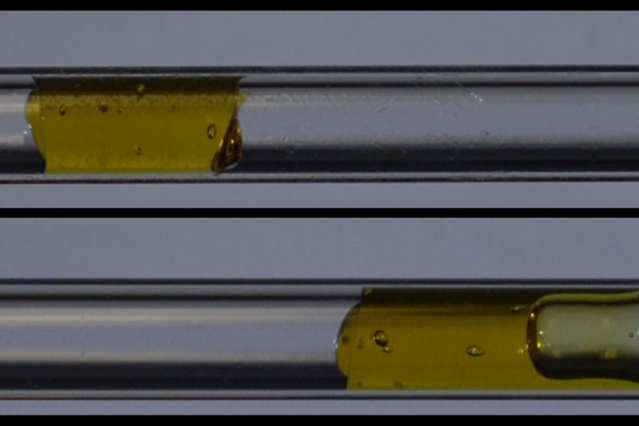 A gel-like yield stress fluid, top, moves as a plug without shearing in a tube with the new surface coating. At bottom, the same fluid is seen shearing while it flows in an uncoated tube, where part of the fluid gets stuck to the tube while part of it continues to flow. Image: Courtesy of the researchers

An MIT research team that has already conquered the problem of getting ketchup out of its bottle has now tackled a new category of consumer and manufacturing woe: how to get much thicker materials to slide without sticking or deforming.

The slippery coatings the team has developed, called liquid-impregnated surfaces, could have numerous advantages, including eliminating production waste that results from material that sticks to the insides of processing equipment. They might also improve the quality of products ranging from bread to pharmaceuticals, and even improve the efficiency of flow batteries, a rapidly developing technology that could help to foster renewable energy by providing inexpensive storage for generated electricity.

These surfaces are based on principles initially developed to help foods, cosmetics, and other viscous liquids slide out of their containers, as devised by Kripa Varanasi, a professor of mechanical engineering at MIT, along with former students Leonid Rapoport PhD ’18 and Brian Solomon PhD ’16. The new work is described in the journal ACS Applied Materials and Interfaces.

Like the earlier surfaces they developed, which led to the creation of a spinoff company called LiquiGlide, the new surfaces are based on a combination of a specially textured surface and a liquid lubricant that coats the surface and remains trapped in place through capillary action and other intermolecular forces associated with such interfaces. The new paper explains the fundamental design principles that can achieve almost 100 percent friction reduction for these gel-like fluids.

Such materials, known as yield-stress fluids, including gels and pastes, are ubiquitous. They can be found in consumer products such as food, condiments, and cosmetics, and in products in the energy and pharmaceuticals industries. Unlike other fluids such as water and oils, these materials will not start to flow on their own, even when their container is turned upside down. Starting the flow requires an input of energy, such as squeezing the container.

But that squeezing has its own effects. For example, bread-making machinery typically includes scrapers that constantly push the sticky dough away from the sides of its container, but that constant scraping can result in over-kneading and a denser loaf. A slippery container that requires no scraping could thus produce better-tasting bread, Varanasi says. By using this system, “beyond getting everything out of the container, you now add higher quality” of the resulting product.

That may not be critical where bread is concerned, but it can have great impact on pharmaceuticals, he says. The use of mechanical scrapers to propel drug materials through mixing tanks and pipes can interfere with the effectiveness of the medicine, because the shear forces involved can damage the proteins and other active compounds in the drug.

By using the new coatings, in some cases it’s possible to achieve a 100 percent reduction in the drag the material experiences—equivalent to “infinite slip,” Varanasi says.

“Generally speaking surfaces are enablers,” says Rapoport. “Superhydrophobic surfaces, for example, enable water to roll easily, but not all fluids can roll. Our surfaces enable fluids to move by whichever way is more preferable for them—be it rolling or sliding. In addition we found that yield-stress fluids can move on our surfaces without shearing, essentially sliding like solid bodies. This is very important when you want to maintain the integrity of these materials when they are being processed.”

Like the earlier version of slippery surfaces Varanasi and his collaborators created, the new process begins by making a surface that is textured at the nanoscale, either by etching a series of closely spaced pillars or walls on the surface, or mechanically grinding grooves or pits. The resulting texture is designed to have such tiny features that capillary action—the same process that allows trees to draw water up to their highest branches through tiny openings beneath the bark—can act to hold a liquid, such as a lubricating oil, in place on the surface. As a result, any material inside a container with this kind of lining essentially only comes in contact with the lubricating liquid, and slides right off instead of sticking to the solid container wall.

The new work described in this paper details the principles the researchers came up with to enable the optimal selection of surface texturing, lubricating material, and manufacturing process for any specific application with its particular combination of materials.

Another important application for the new coatings is in a rapidly developing technology called flow batteries. In these batteries, solid electrodes are replaced by a slurry of tiny particles suspended in liquid, which has the advantage that the capacity of the battery can be increased at any time simply by adding bigger tanks. But the efficiency of such batteries can be limited by the flow rates.

Using the new slippery coatings could significantly boost the overall efficiency of such batteries, and Varanasi worked with MIT professors Gareth McKinley and Yet-Ming Chiang on developing such a system led by Solomon and Xinwei Chen, a former postdoc in Chiang’s lab.

These coatings could resolve a conundrum that flow battery designers have faced, because they needed to add carbon to the slurry material to improve its electrical conductivity, but the carbon also made the slurry much thicker and interfered with its movement, leading to “a flow battery that couldn’t flow,” Varanasi says.

“Previously flow batteries had a trade-off in that as you add more carbon particles the slurry becomes more conductive, but it also becomes thicker and much more challenging to flow,” says Solomon. “Using slippery surfaces lets us have the best of both worlds by allowing flow of thick, yield-stress slurries.”

The improved system allowed the use of a flow electrode formulation that resulted in a fourfold increase in capacity and an 86 percent savings in mechanical power, compared with the use of traditional surfaces. These results were described recently in the journal ACS Applied Energy Materials.

“Apart from fabricating a flow battery device which incorporates the slippery surfaces, we also laid out design criteria for their electrochemical, chemical, and thermodynamic stability,” explains Solomon. “Engineering surfaces for a flow battery opens up an entirely new branch of applications that can help meet future energy storage demand.”

The research was supported by the Joint Center for Energy Storage Research, an Energy Research Hub funded by the U.S. Department of Energy, and by the Martin Family Society of Fellows for Sustainability.