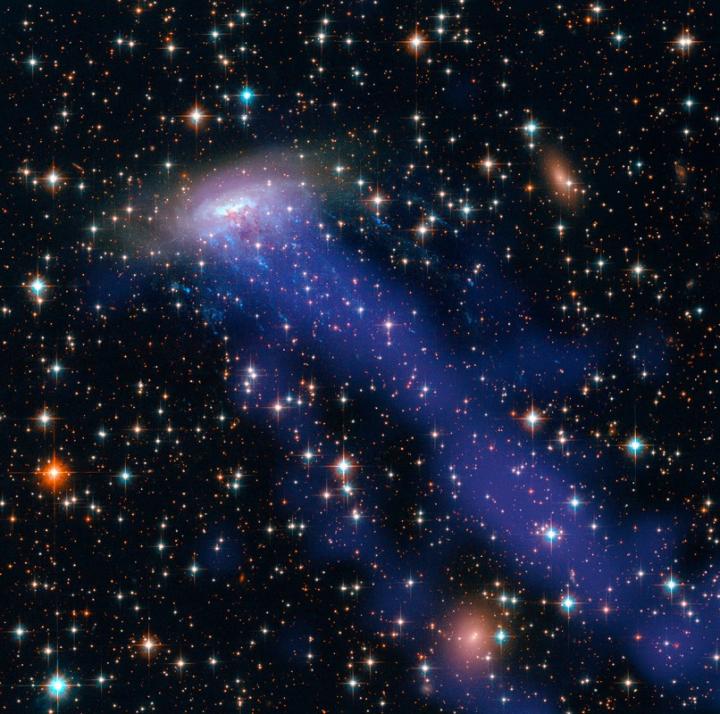 ESO 137-001 is a perfect example of a spiral galaxy zipping through a crammed cluster of galaxies. Gas is being pulled from its disc in a process called ram pressure stripping. The galaxy appears to be losing gas as it plunges through the Norma galaxy cluster. Source: NASA, ESA, and the Hubble Heritage Team (STScI/AURA).

Galaxies come in three main shapes – elliptical, spiral (such as the Milky Way) and irregular. They can be massive or small. To add to this mix, galaxies can also be blue or red. Blue galaxies are still actively forming stars. Red ones mostly are not currently forming stars, and are considered passive.

The processes that cause galaxies to “quench,” that is, cease star formation, are not well understood, however, and constitute an outstanding problem in the study of the evolution of galaxies. Now, using a large sample of around 70,000 galaxies, a team of researchers led by University of California, Riverside astronomers Behnam Darvish and Bahram Mobasher may have an explanation for why galaxies stop creating stars.

The research team, which included scientists at the California Institute of Technology and Lancaster University, United Kingdom, combed through available data from the COSMOS UltraVISTA survey that give accurate distance estimates for galaxies over the past 11 billion years, and focused on the effects of external and internal processes that influence star formation activity in galaxies.

External mechanisms, the research team notes, include drag generated from an infalling galaxy within a cluster of galaxies, which pulls gas away; multiple gravitational encounters with other galaxies and the dense surrounding environment, resulting in material being stripped away from the galaxy; and the halting of the supply of cold gas to the galaxy, thus strangling the galaxy of the material needed to produce new stars over a prolonged period of time.

The researchers explain that internal mechanisms include the presence of a black hole (in which jets, winds, or intense radiation heat up hydrogen gas in the galaxy or blow it out completely, thus preventing the gas from cooling and contracting to form stars) and “stellar outflow” (for example, high-velocity winds produced by massive young stars and supernovae that push the gas out of the host galaxy).

“By using the observable properties of the galaxies and sophisticated statistical methods, we show that, on average, external processes are only relevant to quenching galaxies during the last eight billion years,” said Darvish, a former graduate student in the UC RiversideDepartment of Physics and Astronomy and the first author of the research paper that appears today in The Astrophysical Journal. “On the other hand, internal processes are the dominant mechanism for shutting off star-formation before this time, and closer to the beginning of the universe.”

The finding gives astronomers an important clue towards understanding which process dominates quenching at various cosmic times. As astronomers detect quenched non-star-forming galaxies at different distances (and therefore times after the Big Bang), they now can more easily pinpoint what quenching mechanism was at work.

In astronomy, much debate continues on whether it is only internal, external or a combination of both phenomena that makes a galaxy quench star formation. It is still not clear what processes are mostly responsible, and unclear, too, is the fractional role of different physical processes in shutting down the star-formation. It is also not fully understood when these processes come to play an important role in the evolutionary life of galaxies.

“The situation becomes more complex when we realize that all these mechanisms may depend on properties of galaxies being quenched, they may evolve with time, they act at different time-scales – fast or slow – and they may depend on the properties of the quenching factors as well,” Darvish said.

Mobasher, a professor of physics and astronomy who supervised Darvish during the course of the research, said, “We found that on average the external processes act in a relatively short time-scale, around one billion years, and can more efficiently quench galaxies that are more massive. Internal effects are more efficient in dense clusters of galaxies. The time-scale is very important. A short time-scale suggests that we need to look for external physical processes that are fast in quenching. Another important result of the work is that internal and external processes do not act independently of each other in shutting-off the star formation.”

Darvish and Mobasher were joined in the research by David Sobral at Lancaster University, the United Kingdom; and Alessandro Rettura, Nick Scoville, Andreas Faisst and Peter Capak at the California Institute of Technology. Darvish graduated from UCR with a Ph.D. in astronomy in 2015. The bulk of the research was done while he was working toward his doctoral degree. He is now a postdoctoral scholar at Caltech.

Next, the research team will work on extending this study to the environment of galaxies on much larger scales (in the cosmic web).