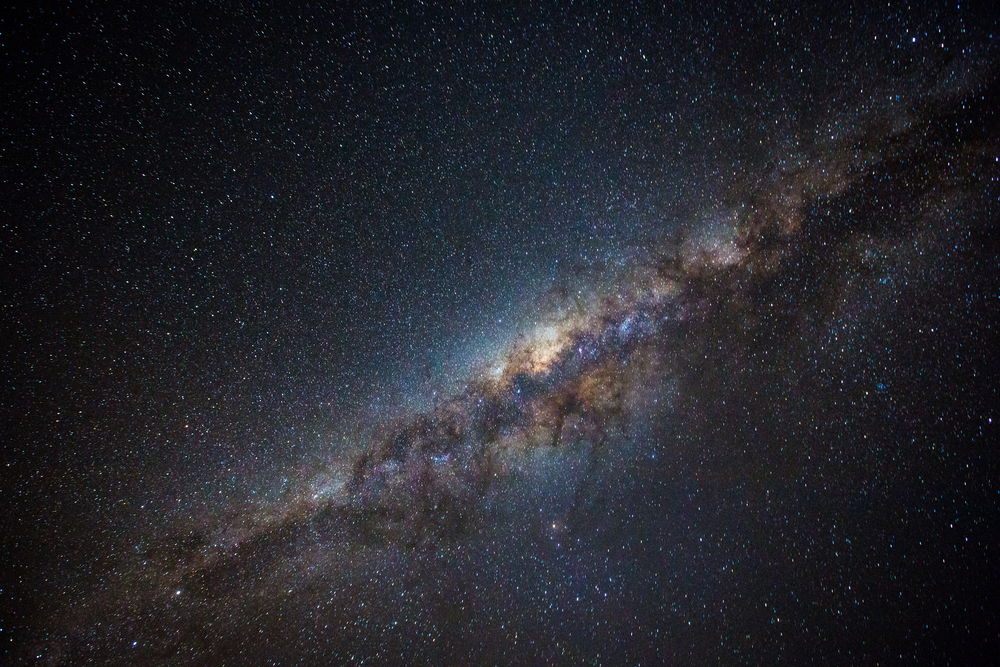 An international team of astronomers has discovered that some stars located in the Galactic halo surrounding the Milky Way – previously thought to be remnants of invading galaxies from the past – are instead former residents of the Galactic disk, kicked out by those invading dwarf galaxies.

One in a series of scientific papers contributing to this story appears this week in the journal Nature.

“These stars are teaching us what happened to the Galactic disk – what happened to the Milky Way in the past,” said Columbia University Professor of Astronomy Kathryn Johnston, a co-author on the current paper and co- or lead author of previous papers leading up to this finding. “We’re simultaneously learning about our history and our future. This gives us a whole new window into our universe.”

The galaxy in which we live, the Milky Way, is a fairly average, spiral galaxy with the majority of its stars circling its center within a disk, and a dusting of stars beyond that orbiting in what’s called the Galactic halo.

About five years ago, researchers set out to study a set of structures – large over-densities of stars streaming in partial rings close to the Galactic disk. These clusters extend well beyond what is considered to be the edge of the disk and bulge above and below the halo where disk stars normally lie. The streams had been interpreted as signatures of the Milky Way’s tumultuous past – debris from many smaller galaxies that are thought to have invaded the Milky Way galaxy and been disrupted by its gravitational field.

Allyson Sheffield, a post-doc at Columbia University at the time, led the first project to measure the speed of stars in the most distant structures, known as the Triangulum-Andromeda Clouds, and demonstrated that those stars formed coherent sequences in speed, as well as in space. Johnston then produced simulations that could explain the positions and speeds of the stars. Researchers at Fermi Lab next collected and consolidated data on the closer structures, known as A13 and the Monoceros Ring, to show that they also followed clear sequences in speed and space. Further, that study showed that all of the structures followed the same sequences, suggesting they could be related to each other, perhaps through the same disruption event.

The research team then looked at the composition of the stars in the over-densities. While previous studies had looked at “M giant” stars, which are relatively rich in elements heavier than helium, Adrian Price-Whelan, then a graduate student at Columbia University, proposed expanding this sample by also collecting speeds for “RR Lyrae” stars, which contain a much smaller fraction of heavy elements.

This first data for the Triangulum Andromeda Clouds showed that none of the RR Lyrae stars followed the same sequence as the M giants. It also revealed that the Galactic disk contains much larger populations of M giant stars than RR Lyrae stars, which is the opposite of smaller galaxies falling into the Milky Way, which typically contain larger populations of RR Lyrae stars and few, if any M giant stars. The researchers realized that these stellar over-densities bulging from the Galactic disk were not remnants of an invading galaxy destroyed by the Milky Way’s gravitational field, but that they were the result of an eviction of the disk itself.

The current study confirms this emerging picture. The paper, which cites all of the team’s previous work, reveals the compositions of several M giant stars burning in the rings around the Milky Way galaxy. As predicted, they are composed of a mixture of elements very similar to those in the Galactic disk and unlike the composition of stars located in the Galactic halo or in the still-invading satellite galaxies.

“I’m excited to see the final piece of evidence slot into place to confirm this story of our galaxy being bombarded from the outside – a story that astronomers from all over the globe have contributed to piecing together over many years,” Johnston said. “Many recent efforts in the field have concentrated on how our galaxy rips other, smaller galaxies apart. It’s refreshing to find confirmation of the damage those smaller galaxies inflict upon the Milky Way.”