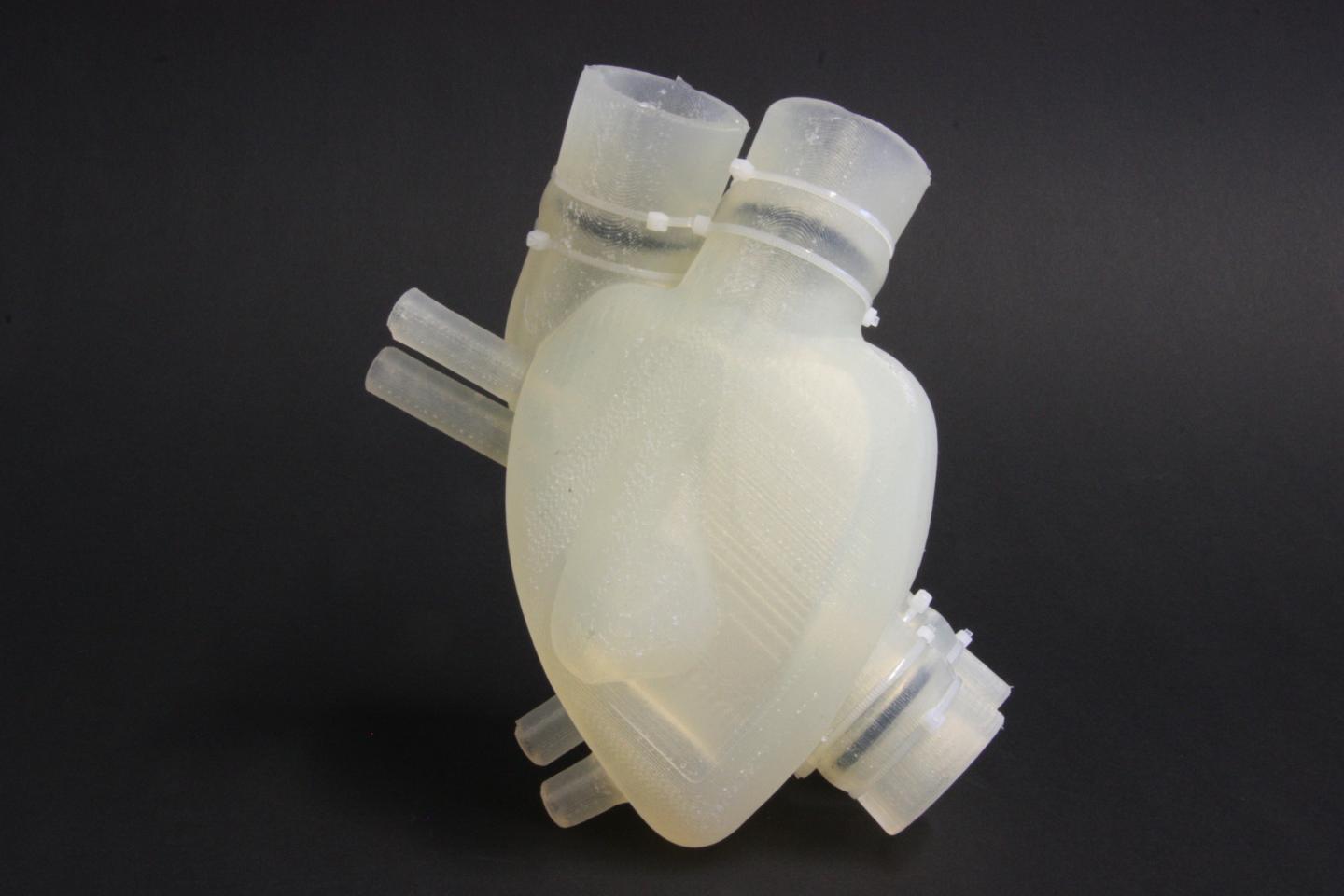 It looks like a real heart. And this is the goal of the first entirely soft artificial heart: to mimic its natural model as closely as possible. The silicone heart has been developed by Nicholas Cohrs, a doctoral student in the group led by Wendelin Stark, Professor of Functional Materials Engineering at ETH Zurich. The reasoning why nature should be used as a model is clear. Currently used blood pumps have many disadvantages: their mechanical parts are susceptible to complications while the patient lacks a physiological pulse, which is assumed to have some consequences for the patient. “Therefore, our goal is to develop an artificial heart that is roughly the same size as the patient’s own one and which imitates the human heart as closely as possible in form and function,” says Cohrs.

A well-functioning artificial heart is a real necessity: about 26 million people worldwide suffer from heart failure while there is a shortage of donor hearts. Artificial blood pumps help to bridge the waiting time until a patient receives a donor heart or their own heart recovers.

The soft artificial heart was created from silicone using a 3D-printing, lost-wax casting technique; it weighs 390 grams and has a volume of 679 cm3. “It is a silicone monoblock with complex inner structure,” explains Cohrs. This artificial heart has a right and a left ventricle, just like a real human heart, though they are not separated by a septum but by an additional chamber. This chamber is in- and deflated by pressurized air and is required to pump fluid from the blood chambers, thus replacing the muscle contraction of the human heart.

Thinking in a new direction

Anastasios Petrou, a doctoral student of the Product Development Group Zurich, led by Professor Mirko Meboldt evaluated the performance of this soft artificial heart. The young researchers have just published the results of the experiments in the scientific journal Artificial Organs.

They proved that the soft artificial heart fundamentally works and moves in a similar way to a human heart. However, it still has one problem: it currently lasts for about only 3,000 beats, which corresponds to a lifetime of half to three quarters of an hour. After that, the material can no longer withstand the strain. Cohrs explains: “This was simply a feasibility test. Our goal was not to present a heart ready for implantation, but to think about a new direction for the development of artificial hearts.” Of course, the tensile strength of the material and the performance would have to be enhanced significantly.

Cohrs and Petrou met in the Zurich Heart Project, a flagship project of University Medicine Zurich that brings together 20 research groups from various disciplines and institutions in Zurich and Berlin. Part of the research focuses on improvements on existing blood pumps, such as how to reduce blood damage induced from the mechanical parts of the pump, while others explore extremely elastic membranes or more biocompatible surfaces. This is done in close collaboration with the clinicians in Zurich and Berlin.

The lively exchanges among the researchers also helped this Zurich Heart sub-project. Doctoral students of Product Development Group Zurich, who are working on new technologies for blood pumps, have developed a testing environment with which they can simulate the human cardiovascular system. The researchers of the silicone heart made use of this testing environment for their development process which also included the use of a fluid with comparable viscosity as human blood. “Currently, our system is probably one of the best in the world,” says Petrou proudly.

Researching the heart is an appealing task, and Cohrs and Petrou would both like to remain in this research field. “As a mechanical engineer, I would never have thought that I would ever hold a soft heart in my hands. I’m now so fascinated by this research that I would very much like to continue working on the development of artificial hearts,” says Petrou.