Despite the fact that many types of drugs work by blocking a G-protein-coupled receptor (GPCR), there are currently no approved cancer drugs that work this way. The existing scientific literature includes published papers, which observe that dopamine receptors have an effect on cancer but this connection raises a few key questions.

1.  Does it make sense that neurotransmitter pathways have a role in oncology?

Dopamine Receptor D2 (DRD2) is overexpressed by several types of human cancer and its inhibition is associated with anti-cancer activity. This is documented by studies describing: 1) elevated DRD2 expression in malignant cells compared with normal cells; 2) preclinical studies documenting the antitumor effects of antagonizing DRD2 signaling; and 3) observed associations of cancer incidence with other diseases that affect dopamine receptor signaling.

Second, there are a large number of preclinical studies documenting the antitumor effects of antagonizing DRD2 signaling, either through genetic or pharmacological inhibition (Table 2). The most thoroughly investigated is thioridazine, an antipsychotic DRD2 antagonist that in preclinical models is pro-apoptotic, anti-angiogenic, and depletes cancer stem cells in several tumor types. Several signaling pathways have been implicated in the antitumor mechanism of DRD2 inhibitors, including downregulation of Ras signaling and upregulation of oxidative stress.

Third, there are meta-analyses that have examined cancer incidence in populations with dysregulated dopamine receptor signaling and have found that dopamine blockade leads to lower levels of cancer. For example, a meta-analysis of patients with Parkinson’s disease (Bajaj et al, 2010), where dopamine is downregulated (effectively antagonized), revealed a significantly reduced incidence of most cancers.  Interestingly, while this association was true for most solid and hematological malignancies, the exceptions – including melanoma and thyroid cancers – are tumors with low expression of DRD2. A similar analysis of schizophrenic patients where dopamine is upregulated, found an increase in cancer incidence that is reversed in patients who are compliant with treatments that antagonize dopamine (Dalton et al, 2005).

2.  How is dopamine receptor signaling involved in cancer?

DRD2 is a member of the dopamine receptor family that is grouped into two classes: the D1-like receptor class composed of DRD1 and DRD5 and the D2-like receptor class composed of DRD2 (with the highest affinity for dopamine), DRD3, and DRD4. All of the dopamine receptors are G protein-coupled receptors (GPCRs), whose signaling is primarily mediated by interaction with and activation of heterotrimeric GTP-binding proteins (G proteins). GPCRs control pro-survival signaling pathways (e.g. ERK and Akt) that are broadly important in human cancer.

of adenylate cyclase, a key enzyme involved in the synthesis of cyclic AMP (cAMP) that affects many intracellular signaling pathways. By contrast, the D1-like family of receptors is coupled to a different type of G protein that stimulates adenylate cyclase and thus opposes D2-like receptor signaling. 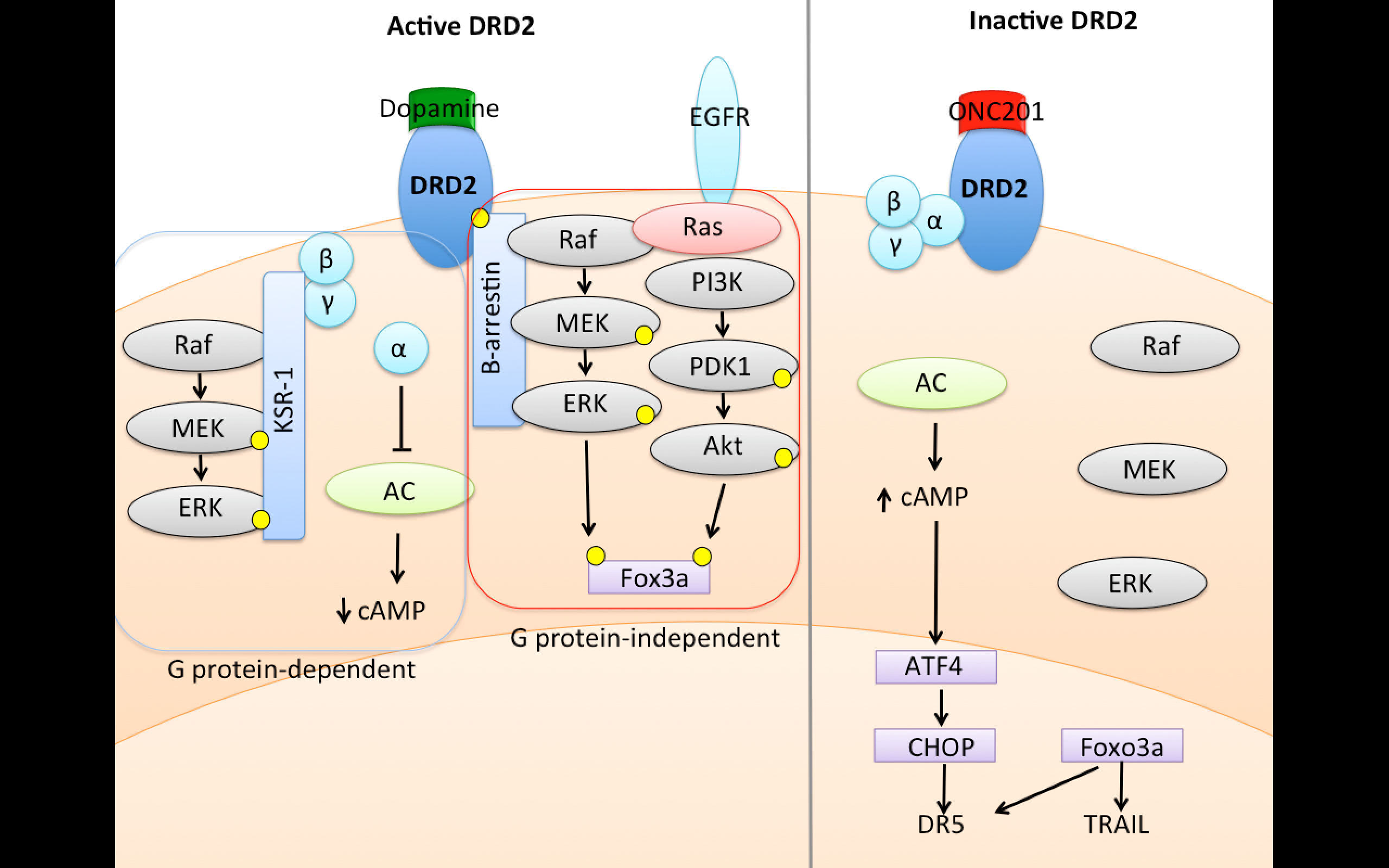 Activation of D2-like receptors also stimulates ERK and Akt signaling that promotes cancer cell survival. The mechanism that couples D2-like receptors to this signaling is complex and differs depending on cell type, but often involves scaffold proteins such as KSR-1 or β-arrestin that are recruited to the activated GPCR and facilitate kinase signaling cascades.

Oncoceutics’ lead compound ONC201 has demonstrated significant anti-tumor activity in both pre-clinical and clinical studies dating back to 2011.  Recently, it has been demonstrated that ONC201 is a selective antagonist of DRD2, a GPCR that is a dopamine receptor, and that this DRD2 antagonism is responsible for antitumor activity of ONC201.

This makes ONC201 the first clinical molecule for oncology that targets neurotransmitter pathways.