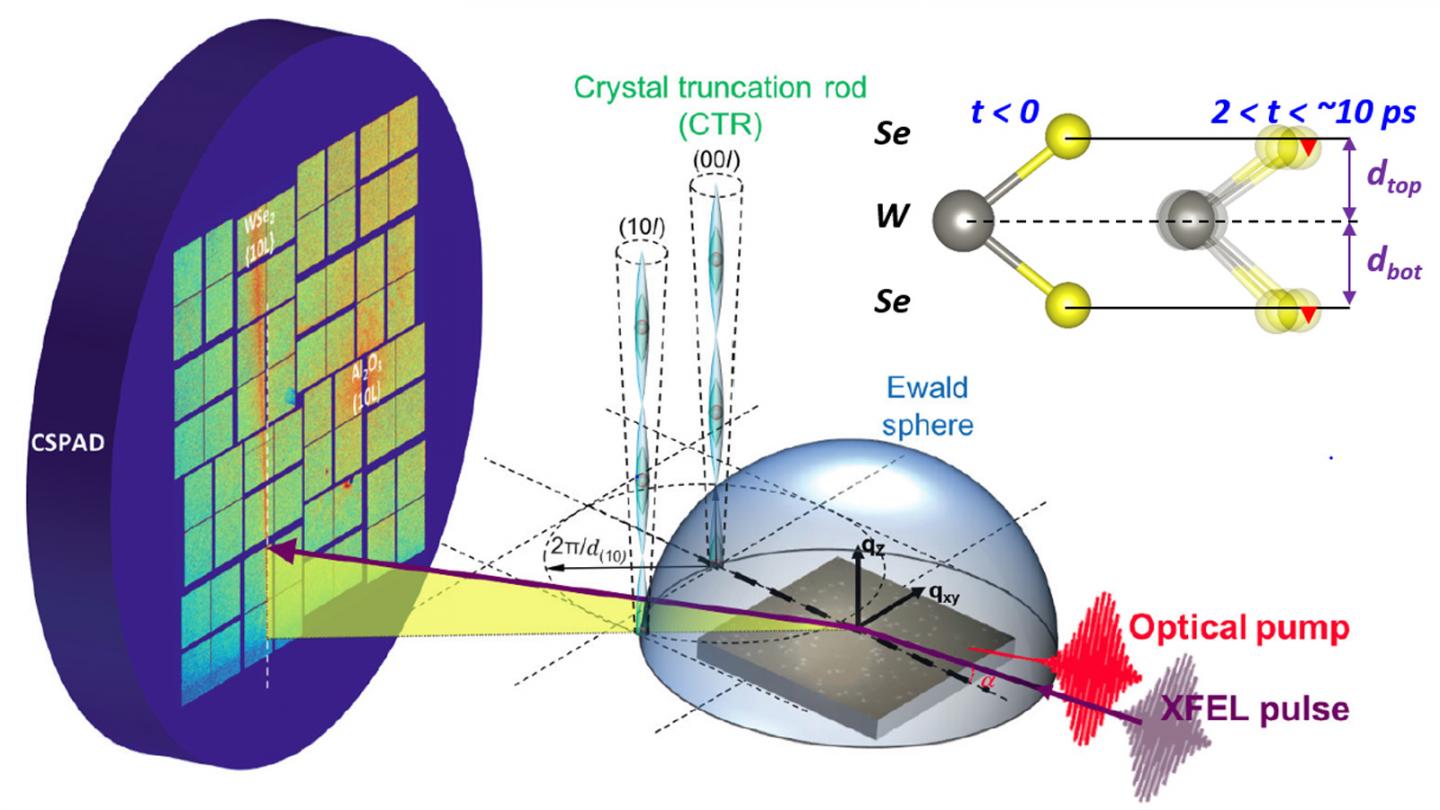 Using a never-before-seen technique, scientists have found a new way to use some of the world’s most powerful X-rays to uncover how atoms move in a single atomic sheet at ultrafast speeds.

The study, led by researchers at the U.S. Department of Energy’s (DOE) Argonne National Laboratory and in collaboration with other institutions, including the University of Washington and DOE’s SLAC National Accelerator Laboratory, developed a new technique called ultrafast surface X-ray scattering. This technique revealed the changing structure of an atomically thin two-dimensional crystal after it was excited with an optical laser pulse.

“Extending [surface X-ray scattering] to do ultrafast science in single-layer materials represents a major technological advance that can show us a great deal about how atoms behave at surfaces and at the interfaces between materials.” — Argonne scientist Haidan Wen

Unlike previous surface X-ray scattering techniques, this new method goes beyond providing a static picture of the atoms on a material’s surface to capture the motions of atoms on timescales as short as trillionths of a second after laser excitation.

“Surface X-ray scattering is challenging enough on its own,” said Argonne X-ray physicist Hua Zhou, an author of the study. “Extending it to do ultrafast science in single-layer materials represents a major technological advance that can show us a great deal about how atoms behave at surfaces and at the interfaces between materials.”

Using ultrafast surface X-ray scattering, Wen and postdoctoral researcher I-Cheng Tung led an investigation of a two-dimensional material called tungsten diselenide (WSe2). In this material, each tungsten atom connects to two selenium atoms in a “V” shape. When the single-layer material is hit with an optical laser pulse, the energy from the laser causes the atoms to move within the plane of the material, creating a counterintuitive effect.

“You normally would expect the atoms to move out of the plane, since that’s where the available space is,” Wen said. “But here we see them mostly vibrate within the plane right after excitation.”

These observations were supported by first-principle calculations led by Aiichiro Nakano at University of Southern California and scientist Pierre Darancet of Argonne’s Center for Nanoscale Materials (CNM), a DOE Office of Science User Facility.

The team obtained preliminary surface X-ray scattering measurements at Argonne’s Advanced Photon Source (APS), also a DOE Office of Science User Facility. These measurements, although they were not taken at ultrafast speeds, allowed the researchers to calibrate their approach for the LCLS free-electron laser, Wen said.

The direction of atomic shifts and the ways in which the lattice changes have important effects on the properties of two-dimensional materials like WSe2, according to University of Washington professor Xiaodong Xu. “Because these 2-D materials have rich physical properties, scientists are interested in using them to explore fundamental phenomena as well as potential applications in electronics and photonics,” he said. “Visualizing the motion of atoms in single atomic crystals is a true breakthrough and will allow us to understand and tailor material properties for energy relevant technologies.”

“This study gives us a new way to probe structural distortions in 2-D materials as they evolve, and to understand how they are related to unique properties of these materials that we hope to harness for electronic devices that use, emit or control light,” added Aaron Lindenberg, a professor at SLAC and Stanford University and collaborator on the study. “These approaches are also applicable to a broad class of other interesting and poorly understood phenomena that occur at the interfaces between materials.”

A paper based on the study, “Anisotropic structural dynamics of monolayer crystals revealed by femtosecond surface X-ray scattering,” appeared in the March 11 online edition of Nature Photonics.

Other authors on the study included researchers from the University of Washington, University of Southern California, Stanford University, SLAC and Kumamoto University (Japan). The APS, CNM, and LCLS are DOE Office of Science User Facilities.

The research was funded by the DOE’s Office of Science.