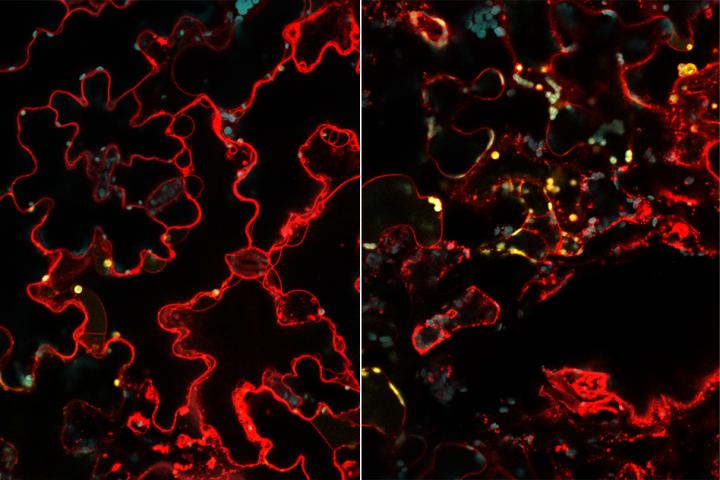 MIT researchers have developed a genetic tool that could make it easier to engineer plants that can survive drought or resist fungal infections. Their technique, which uses nanoparticles to deliver genes into the chloroplasts of plant cells, works with many different plant species. Credit: The researchers

Now, a team led by researchers from the Massachusetts Institute of Technology (MIT) has created a genetic tool that uses nanoparticles to deliver genes into the chloroplasts of plant cells, engineering plants to survive droughts and resist fungal infections.

“This is an important first step toward chloroplast transformation,” Nam-Hai Chua, the deputy chair of the Temasek Life Sciences Laboratory at the National University of Singapore and a professor emeritus at Rockefeller University, said in a statement. “This technique can be used for rapid screening of candidate genes for chloroplast expression in a wide variety of crop plants.”

The researchers discovered in recent years that they could tune the size and electrical charge of nanoparticles, which enables them to design nanoparticles to penetrate plant cell membranes in a mechanism called lipid exchange envelop penetration (LEEP). LEEP ultimately allowed the researchers to create glowing plants with embedded nanoparticle that carry luciferase—a light-emitting protein—into their leaves.

This quickly led to more ambitious studies testing whether they could deliver genes into the chloroplasts in plants to express the genes in a way that generates much greater quantities of desired proteins.

“Bringing genetic tools to different parts of the plant is something that plant biologists are very interested in,” Michael Strano, the Carbon P. Dubbs Professor of Chemical Engineering at MIT, said in a statement. “Every time I give a talk to a plant biology community, they ask if you could use this technique to deliver genes to the chloroplast.”

Chloroplast contains about 80 genes that code for proteins that are needed for photosynthesis. It also has its own ribosomes to allow the proteins to assemble from within.

However, it was previously difficult to implement genes into the chloroplasts without using a high-pressure “gene gun” that forces genes into the cells in an inefficient process that could ultimately damage the plant.

They then applied a needleless syringe filled with the new particle solution to the lower side of the leaf surface to inject the nanoparticles through the stomata, pores that usually control water evaporation.

For the study, the researchers delivered a gene for yellow fluorescent protein that enables them to visualize which plant cells are expressed and found that approximately 47 percent of the plant cells produced the protein. The research team believes they can increase the proteins if they are able to deliver more particles.

One of the benefits of the new approach is that it can be used on several plant species, including spinach, watercress, tobacco, arugula and Arabidopsis thaliana, a plant commonly used for research. The technique can also be used with other types of nanomaterials.

Eventually, the team hopes to engineer a variety of desirable traits into vegetables and other crops, including creating leafy vegetables and crops that can grow at higher densities in more urban settings. They also could create drought-resistant crops, fungal resistant bananas, citrus and coffee, and modified rice that does not absorb arsenic from groundwater.

The researchers also found that the engineered traits could be passed to offspring, but not other plant species.

“That’s a big advantage, because if the pollen has a genetic modification, it can spread to weeds and you can make weeds that are resistant to herbicides and pesticides,” MIT graduate student Tedrick Thomas Salim Lew said in a statement. “Because the chloroplast is passed on maternally, it’s not passed through the pollen and there’s a higher level of gene containment.”