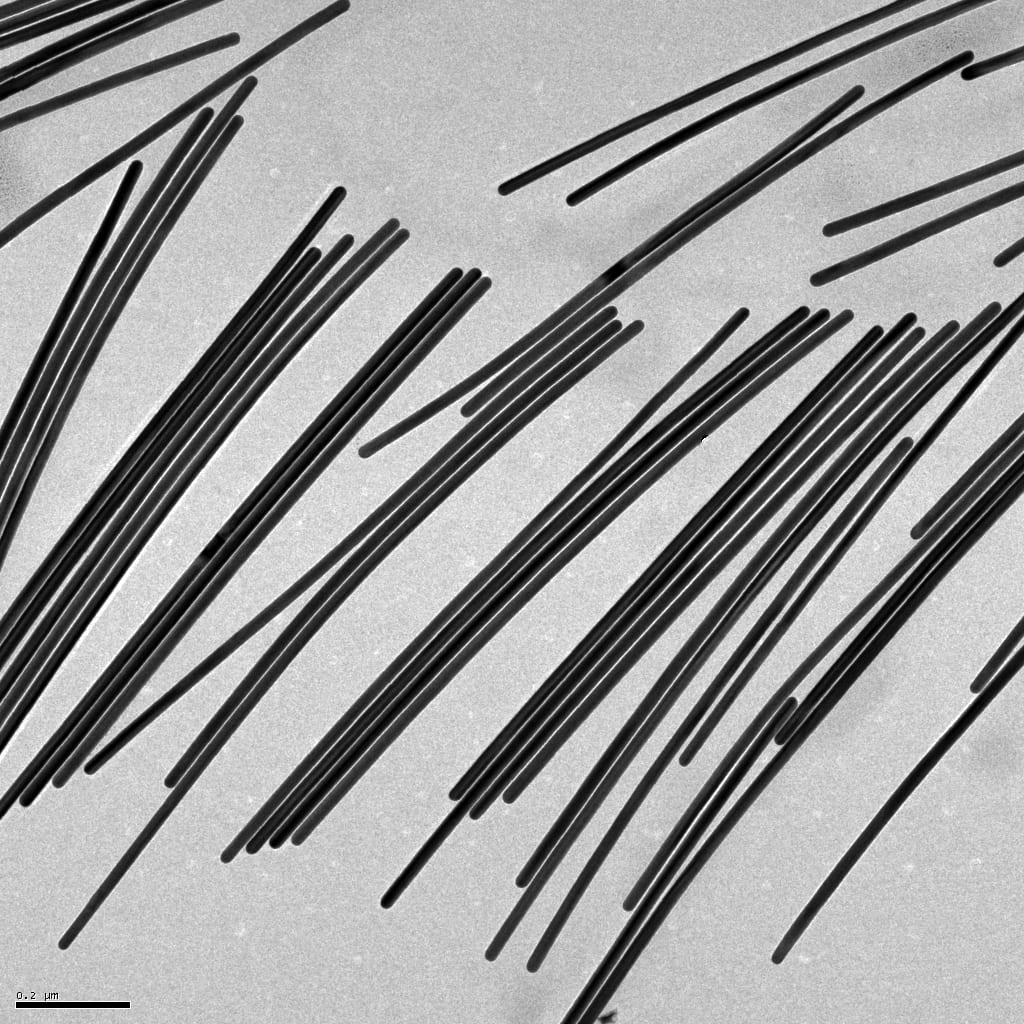 Gold nanowires grown in the Rice University lab of chemist Eugene Zubarev promise to provide tunable plasmonic properties for optical and electronic applications. The wires can be controllably grown from nanorods, or reduced. Courtesy of the Zubarev Research Group

A team from Rice University has discovered how to transform small gold nanorods into fine gold nanowires with just a small dose of vitamin C.

“There’s no novelty per se in using vitamin C to make gold nanostructures because there are many previous examples,” Rice chemist Eugene Zubarev said in a statement. “But the slow and controlled reduction achieved by vitamin C is surprisingly suitable for this type of chemistry in producing extra-long nanowires.”

The researchers started with 25 nanometer thick nanorods and found that the thickness remained constant while their length grew to about 1,000 nanometers in length with the addition of vitamin C. The newly lengthened nanowires’ aspect ratio—their length over width—dictates how they absorb and emit light, as well as how they conduct electrons.

The researchers also were able to fully control and ultimately reverse the process, making it possible to product any desired length of nanowire. This ability allows the researchers to configure the nanowires for electronic and light-manipulating applications, particularly applications that involve plasmons–the light-triggered oscillation of electrons on a metal’s surface–where the nanowire plasmonic response can be tuned to emit light from visible to infrared and beyond, based on their individual aspect ratios.

One of the issues with the new technology is that it is slow, taking several hours to grow a micron-long nanowire.

“In this paper, we only reported structures up to 4 to 5 microns in length,” Zubarev said. “But we’re working to make much longer nanowires.”

Currently, the growth process works with pentatwinned gold nanorods that contain five linked crystals that are stable along the flat surfaces but not at the tips.

“The tips also have five faces, but they have a different arrangement of atoms,” Zubarev said. “The energy of those atoms is slightly lower, and when new atoms are deposited there, they don’t migrate anywhere else.”

The process prevents the wires from gaining girth while growing, thus increasing the aspect ratio as each atom is added, while leaving the tips open to an oxidation or reduction reaction.

The research team also added CTAB, a surfactant, to the nanorods’ reactive tip to cover the flat surfaces.

“The surfactant forms a very dense, tight bilayer on the sides, but it cannot cover the tips effectively,” Zubarev said.

The ascorbic acid provides electrons that combine with gold ions and settle at the tips in the form of gold atoms and the nanowires, and, unlike carbon nanotubes in a solution that easily aggregate, keep their distance from one another.

“The most valuable feature is that it is truly one-dimensional elongation of nanorods to nanowires,” Zubarev said. “It does not change the diameter, so in principle we can take small rods with an aspect ratio of maybe two or three and elongate them to 100 times the length.”

These new properties, along with gold’s inherent metallic properties, could enhance their use in a number of applications including sensing, diagnostics, imaging and therapeutics.

The researchers believe that the process should apply to other metal nanorods, such as silver.