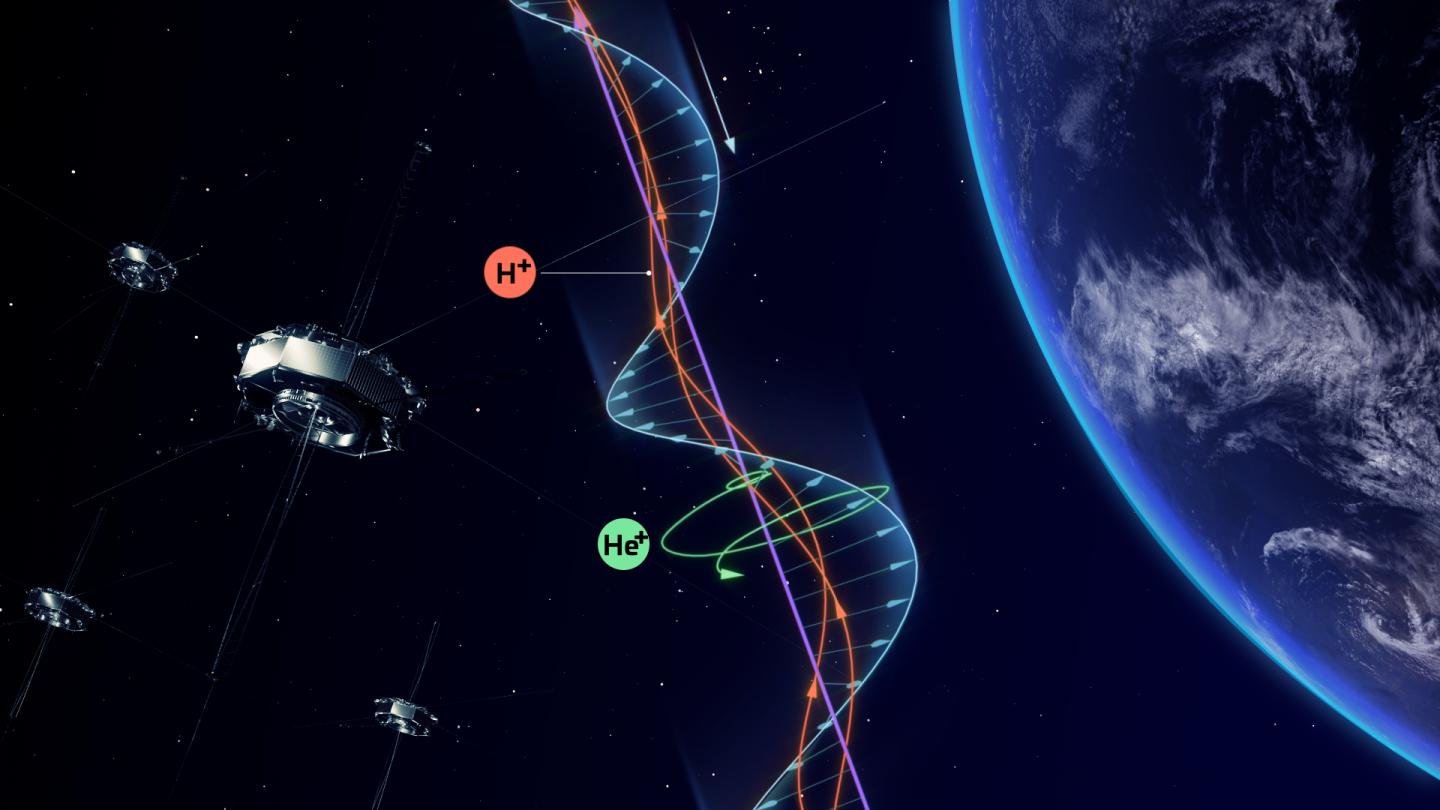 Electromagnetic ion cyclotron waves are generated by the instability of hydrogen ions and cause nearby helium ions to accelerate. Credit: Y. Miyoshi

The Earth’s magnetosphere contains plasma, an ionized gas composed of positive ions and negative electrons. The motion of these charged plasma particles is controlled by electromagnetic fields. The energy transfer processes that occur in this collisionless space plasma are believed to be based on wave-particle interactions such as particle acceleration by plasma waves and spontaneous wave generation, which enable energy and momentum transfer.

However, while the coexistence of waves with accelerated particles in the magnetosphere has been studied for many years, the gradual nature of the interactions between them has made observation of these processes difficult. Detection of local energy transfer between the particles and the fields is therefore required to enable quantitative assessment of their interactions.

Researchers from Nagoya University’s Institute for Space-Earth Environmental Research (ISEE) are part of a research team that have performed ultrafast measurements using four Magnetospheric Multiscale (MMS) spacecraft to evaluate the energy transfer that occurred during interactions associated with electromagnetic ion cyclotron waves. “We observed that the ion distributions were not symmetrical around the magnetic field direction but were in fact in phase with the plasma wave fields,” states Nagoya University’s Masafumi Shoji.

The high-time-resolution measurements provided by the MMS spacecraft were combined with composition-resolved ion measurements to demonstrate the simultaneous occurrence of two energy transfers. The first energy transfer was from hot anisotropic hydrogen ions to an ion cyclotron wave via a cyclotron resonance process, while the second transfer was from the cyclotron wave to helium ions, which took place via a nonresonant interaction and saw the cold He+ ions being accelerated to energies of up to 2 keV.

“This represents direct quantitative evidence of the occurrence of collisionless energy transfer between two distinct particle populations via wave-particle interactions,” says Yoshizumi Miyoshi from Nagoya University’s ISEE. “Measurements of this type will even provide the capability to identify the types of wave-particle interactions that are occurring.” The team’s findings were recently published in Science.

It is hoped that this research represents a major step towards a quantitative understanding of the wave-particle interactions and energy transfer between particle populations in space plasma. This would have implications for our understanding of a wide variety of space plasma phenomena, including the Van Allen radiation belt, geomagnetic storms, auroral particle precipitation, and atmospheric loss from planets, such as the loss of oxygen ions from Earth’s atmosphere.