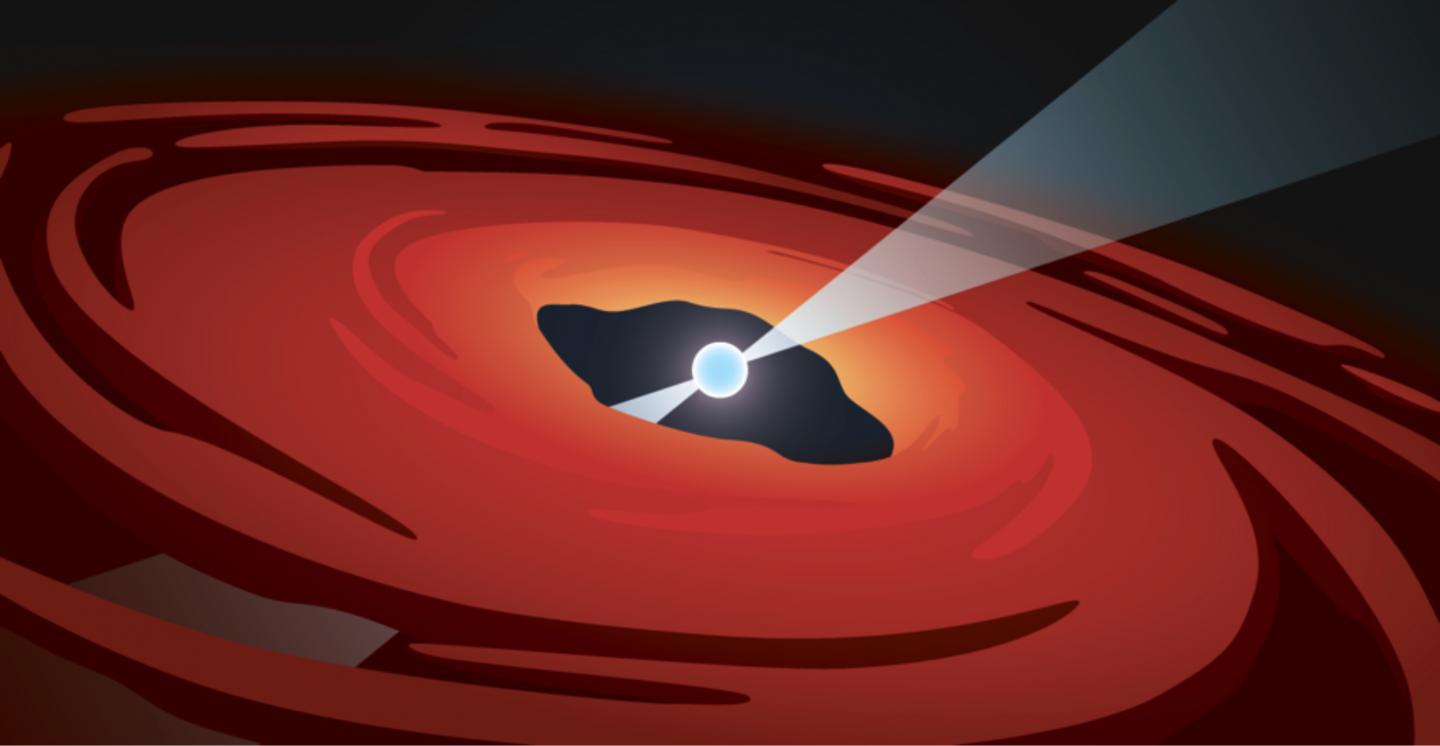 Pulsar and accretion disc, this is an artist’s rendering. Image courtesy of the MIPT Press Office

An international team of astrophysicists including Russian scientists from the Space Research Institute of the Russian Academy of Sciences (RAS), MIPT, and Pulkovo Observatory of RAS has detected an abrupt decrease of pulsar luminosity following giant outbursts. The phenomenon is associated with the so-called “propeller effect,” which was predicted more than 40 years ago. However, this is the first study to reliably observe the transition of the two X-ray pulsars 4U 0115+63 and V 0332+53 to the “propeller regime.” The results of the observations, the conclusions reached by the researchers, and the relevant calculations were published in Astronomy & Astrophysics.

The two sources studied, 4U 0115+63 and V 0332+53, belong to a rather special class of transient X-ray pulsars. These stars alternately act as weak X-ray sources, undergo giant outbursts, and disappear from sight completely. The transitions of pulsars between different states provide valuable information about their magnetic field and the temperature of the surrounding matter. Such information is indispensable, as the immensely strong magnetic fields and extremely high temperatures make direct measurements impossible in a laboratory on Earth.

The name of a pulsar is preceded by a letter designating the first observatory to discover it, which is followed by a numerical code containing the coordinates of the pulsar. The “V” refers to Vela 5B, a US military satellite that was launched to spy on the Soviets. As for the “4U” in the other name, it stands for the fourth Uhuru catalog, compiled by the first observatory in orbit dedicated specifically to X-ray astronomy. Following the discovery of the first pulsar, it was originally known as “LGM-1” (for “little green men”), because it was a source of regular radio pulses, leading scientists to believe that they might have received a signal from intelligent extraterrestrials.

An X-ray pulsar is a rapidly spinning neutron star with a strong magnetic field. A neutron star can be part of a binary system. In a process that astrophysicists call accretion, the neutron star can channel gas from its normal star companion. The attracted gas spirals toward the neutron star forming an accretion disk, which is disrupted at the magnetosphere radius. During accretion the matter penetrates to a certain extent into the magnetosphere, “freezes into it,” and flows along the lines of the magnetic field toward the magnetic poles of the neutron star. Falling toward the poles, the gas is heated to several hundred million degrees, which causes the emission of X-rays. If the magnetic axis of a neutron star is skewed relative to its rotational axis, the X-ray beams it emits rotate in a manner that resembles the way beacons work. For an “onshore” observer, the source appears to be sending signals at regular intervals ranging from fractions of a second to several minutes.

A neutron star is one of the possible remnants left behind by a supernova. It can be formed at the end of stellar evolution, if the original star was massive enough to allow gravitation to compress the stellar matter enough to make electrons combine with protons yielding neutrons. The magnetic field of a neutron star can be more than ten orders of magnitude stronger that any magnetic field that could be achieved on Earth.

A binary system where the normal star has filled its Roche lobe.

In a binary system, an X-ray pulsar is observed when the neutron star is accreting matter from its normal star companion–often a giant or a supergiant characterized by a strong stellar wind (ejection of matter into space). Alternatively, it can be a smaller star like our own Sun that has filled its Roche lobe–the region beyond which it is unable to hold on to the matter attracted by the gravity of the neutron star companion.

A NASA video showing the accretion of matter by a pulsar from its companion star.

The 4U 0115+63 and V 0332+53 pulsars are irregular X-ray sources (transients), owing to the fact that their stellar companions belong to the rather unusual Be star class. The axial rotation of a Be star is so rapid that it occasionally starts “bulging” at the equator, whereby a gas disk is formed around it, filling the Roche lobe. The neutron star starts rapidly accreting the gas from its “donor” companion, causing a sharp increase in X-ray emission called an X-ray outburst. At some point, after the matter in the equatorial bulge starts to deplete, the accretion disk becomes exhausted, and the gas can no longer fall onto the neutron star due to the influence of the magnetic field and the centrifugal force. This gives rise to a phenomenon known as the “propeller effect”: the pulsar enters a state where accretion does not occur, and the X-ray source is no longer observed.

Astronomers use the term “luminosity” to refer to the total amount of energy emitted by a celestial body per unit time. The red line in the diagram represents the threshold luminosity for the 4U 0115+63 pulsar. Observations of the other source (V 0332+53) produced similar results. The blue lines mark the moments in time, when the distance between the pulsar and the companion was at a minimum. This proximity of the companion star might cause the neutron star to go into overdrive and resume emission (see diagram), provided that sufficient amounts of matter are still available for accretion.

The Russian scientists used the X-ray telescope (XRT) based on NASA’s Swift space observatory to measure the threshold luminosity that marks the transition of a pulsar to the propeller regime. This parameter depends on the magnetic field and the rotational period of the pulsar. The rotational periods of the sources in this study are known based on the intervals between the pulses that we can register: 3.6 s in the case of 4U 0115+63 and 4.3 s for V 0332+53. Knowing both the threshold luminosity and the rotational period, one can calculate the strength of the magnetic field. The research findings are in agreement with the values obtained using other methods. However, the luminosity was only reduced by a factor of 200, as compared to the expected 400 times reduction. The researchers hypothesized that there could be two possible explanations for this discrepancy. Firstly, the neutron star surface could become an additional source of X-rays, as it cools down following an outburst. Secondly, the propeller effect could leave some room for matter transfer between the two stars, as opposed to sealing the neutron star off completely. In other words, an unaccounted for mechanism could be involved enabling accretion to continue to a certain extent.

The transition of a pulsar into the propeller mode is challenging to observe, as the low luminosity state cannot be detected easily. For 4U 0115+63 and V 0332+53, this was attempted following the previous outbursts of these sources. However, the instruments available at the time were not sensitive enough to see the pulsars in the “off-mode.” This study is the first to demonstrate reliably that these two sources do indeed “black out.” Moreover, the researchers showed that knowledge of the luminosity that marks the transition of pulsars into the propeller regime can be used to learn more about the structure and intensity of the magnetic fields around neutron stars.

Prof. Dr. Alexander Lutovinov of the Russian Academy of Sciences, Head of Laboratory at the Space Research Institute (IKI RAS) and a professor at MIPT, comments, “Knowledge of the structure of the magnetic fields of neutron stars is of paramount importance for our understanding of their formation and evolution. In this research, we determined the dipole magnetic field component, which is linked to the propeller effect, for two neutron stars. We demonstrate that this independently calculated value can be compared to the available results of magnetic field measurements based on the detection of cyclotron lines in the spectra of sources. By doing this, it is possible to estimate the contribution of the other, higher-order components in the field structure.”