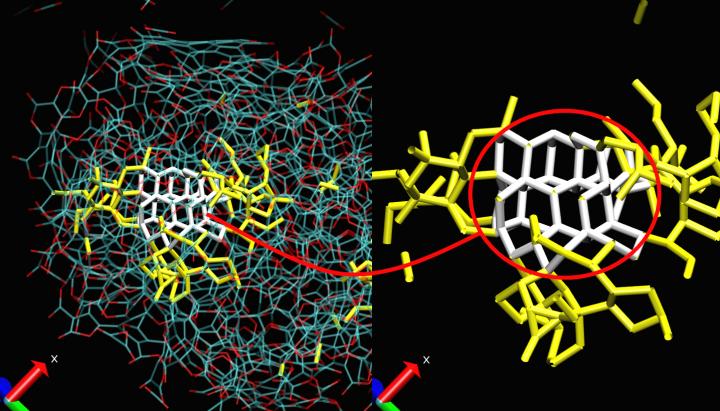 To forge nanodiamonds, which have potential applications in medicine, optoelectronics and quantum computing, researchers expose organic explosive molecules to powerful detonations in a controlled environment. These explosive forces, however, make it difficult to study the nanodiamond formation process. To overcome this hurdle, researchers recently developed a procedure and a computer model that can simulate the highly variable conditions of explosions on phenomenally short time scales. They report their work in The Journal of Chemical Physics. This image shows a carbonaceous nanoparticle (left) and its pure carbon core (right). Blue: carbon atoms. Red: oxygen atoms. White: diamond seed. Yellow: pure carbon network surrounding the diamond seed. Credit: X. Bidault and N. Pineau

Nanodiamonds, bits of crystalline carbon hundreds of thousands of times smaller than a grain of sand, have intriguing surface and chemical properties with potential applications in medicine, optoelectronics and quantum computing. To forge these nanoscopic gemstones, researchers expose organic explosive molecules to powerful detonations in a controlled environment. These explosive forces, however, make it difficult to study the nanodiamond formation process, even under laboratory conditions.

To overcome this hurdle, a pair of French researchers recently developed a procedure and a computer model that can simulate the highly variable conditions of explosions on phenomenally short time scales. The team reports their work in The Journal of Chemical Physics, from AIP Publishing.

“Understanding the processes that form nanodiamonds is essential to control or even tune their properties, making them much better suited for specific purposes,” said Xavier Bidault, a researcher at CEA DAM Ile-de-France, and a co-author on the paper.

Bidault and his co-author Nicolas Pineau used a type of simulation known as Reactive Molecular Dynamics, which simulates the time evolution of complex, chemically reactive systems down to the atomic level.

“The atomic-level interaction model is essential to really understand what’s happening,” said Pineau. “It gives us an intimate way to analyze, step-by-step, how carbon-rich compounds can form nanodiamonds in a high-pressure, high-temperature system.”

Due to the extreme and fleetingly brief conditions of a detonation, actual experimental investigation is impractical, so researchers must rely on atomic-level simulations that show how and where this chemistry occurs.

The new results reveal that a delicate balance of temperature and pressure evolution is necessary for nanodiamonds to form at all. If the initial detonation pressure is too low, carbon solids are able to form, but not diamonds. If the pressure is too high, the carbon “seeds” of nanodiamonds become polluted by other elements, such as oxygen or nitrogen, which prevent the transition to diamond.

Scientists have known for more than 50 years that nanodiamonds form from detonations, but the atomic-level details of their formation have been an open question for at least the last two decades. The most common industrial route for their synthesis is the detonation of carbon-rich organic high explosives. Nanodiamonds can also form naturally from explosive volcanic eruptions or asteroid impacts on Earth.

“Our work shows that the right path seems to be a high initial pressure followed by a sharp pressure decrease,” said Bidault. If the precise conditions are met, nanodiamonds form. These complex pressure paths are typical of detonation processes.