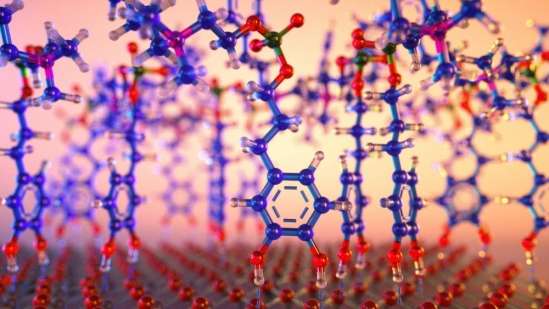 An artist’s concept of a zwitterionic molecule of the type secreted by mussels to prime surfaces for adhesion. (Credit: Peter Allen)

In a development beneficial for both industry and environment, UC Santa Barbara researchers have created a high-quality coating for organic electronics that promises to decrease processing time as well as energy requirements.

In the manufacture of polymer (also known as “organic”) electronics—the technology behind flexible displays and solar cells—the material used to direct and move current is of supreme importance. Since defects reduce efficiency and functionality, special attention must be paid to quality, even down to the molecular level.

Often that can mean long processing times, or relatively inefficient processes. It can also mean the use of toxic substances. Alternatively, manufacturers can choose to speed up the process, which could cost energy or quality.

Fortunately, as it turns out, efficiency, performance and sustainability don’t always have to be traded against each other in the manufacture of these electronics. Looking no further than the campus beach, the UCSB researchers have found inspiration in the mollusks that live there. Mussels, which have perfected the art of clinging to virtually any surface in the intertidal zone, serve as the model for a molecularly smooth, self-assembled monolayer for high-mobility polymer field-effect transistors—in essence, a surface coating that can be used in the manufacture and processing of the conductive polymer that maintains its efficiency.

More specifically, according to Ahn, it was the mussel’s adhesion mechanism that stirred the researchers’ interest. “We’re inspired by the proteins at the interface between the plaque and substrate,” he said.

Before mussels attach themselves to the surfaces of rocks, pilings or other structures found in the inhospitable intertidal zone, they secrete proteins through the ventral grove of their feet, in an incremental fashion. In a step that enhances bonding performance, a thin priming layer of protein molecules is first generated as a bridge between the substrate and other adhesive proteins in the plaques that tip the byssus threads of their feet to overcome the barrier of water and other impurities.

That type of zwitterionic molecule—with both positive and negative charges—inspired by the mussel’s native proteins (polyampholytes), can self-assemble and form a sub-nano thin layer in water at ambient temperature in a few seconds. The defect-free monolayer provides a platform for conductive polymers in the appropriate direction on various dielectric surfaces.

Current methods to treat silicon surfaces (the most common dielectric surface), for the production of organic field-effect transistors, requires a batch processing method that is relatively impractical, said Ahn. Although heat can hasten this step, it involves the use of energy and increases the risk of defects.

With this bio-inspired coating mechanism, a continuous roll-to-roll dip coating method of producing organic electronic devices is possible, according to the researchers. It also avoids the use of toxic chemicals and their disposal, by replacing them with water.

“The environmental significance of this work is that these new bio-inspired primers allow for nanofabrication on silicone dioxide surfaces in the absence of organic solvents, high reaction temperatures and toxic reagents,” said co-author Roscoe Lindstadt, a graduate student researcher in UCSB chemistry professor Bruce Lipshutz’s lab. “In order for practitioners to switch to newer, more environmentally benign protocols, they need to be competitive with existing ones, and thankfully device performance is improved by using this ‘greener’ method.”