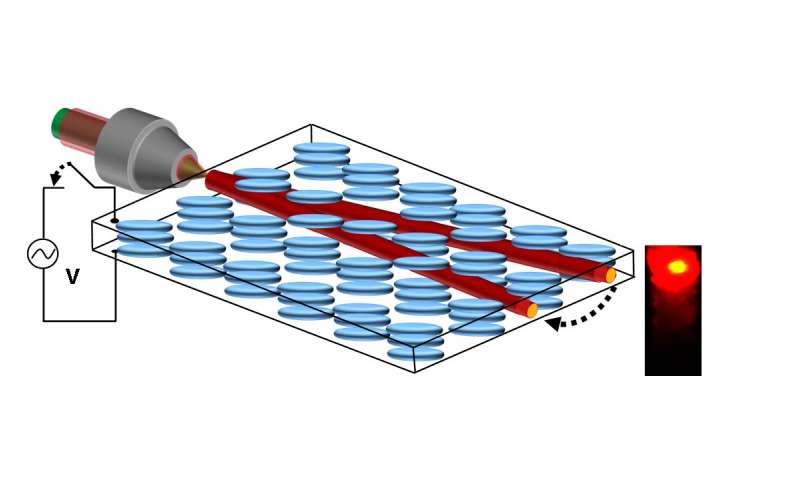 In the last half-century, laser technology has grown into a multi-billion-dollar global industry and has been used in everything from optical-disk drives and barcode scanners to surgical and welding equipment.

Not to mention those laser pointers that entertain and confound your cat.

Now, lasers are poised to take another step forward: Researchers at Case Western Reserve University, in collaboration with partners around the world, have been able to control the direction of a laser’s output beam by applying external voltage.

It is a historic first among scientists who have been experimenting with what they call “random lasers” over the last 15 years or so.

“There’s still a lot of work to do, but this is a clear first proof of a transistor random laser, where the laser emission can be routed and steered by applying an external voltage,” said Giuseppe Strangi, professor and Ohio Research Scholar in Surfaces of Advanced Materials at Case Western Reserve University.

Strangi, who led the research, and his collaborators recently outlined their findings in a paper published in the journal Nature Communications. The project, funded by the National Academy of Sciences of Finland, was aimed at overcoming certain physical limitations intrinsic to that second generations of lasers.

The history of laser technology has been fast-paced as the unique source of light has revolutionized virtually all areas of modern life, including telecommunications, biomedicine and measurement technology.

But laser technology has also been hampered by significant shortcomings: Not only do users have to physically manipulate the device projecting the light to move a laser, but to function, they require a precise alignment of components, making them expensive to produce.

Those limitations could soon be eliminated: Strangi and research partners in Italy, Finland and the United Kingdom have recently demonstrated a new way to both generate and manipulate random laser light, including at nano-scale.

Eventually, this could lead to a medical procedure being conducted more accurately and less invasively or re-routing a fiber optic communication line with the flip of a dial, Strangi said.

So how do lasers actually work?

Conventional lasers consist of an optical cavity, or opening, in a given device. Inside that cavity is a photoluminescent material which emits and amplifies light and a pair of mirrors. The mirrors force the photons, or light particles, to bounce back and forth at a specific frequency to produce the red laser beam we see emitting from the laser.

“But what if we wanted to miniaturize it and get rid of the mirrors and make a laser with no cavity and go down to the nanoscale?” he asked. “That was a problem in the real world and why we could not go further until the turn of this century with random lasers.”

So random lasers, which have been researched in earnest for about the last 15 years, differ from the original technology first unveiled in 1960 mostly in that they do not rely on that mirrored cavity.

In random lasers, the photons emitted in many directions are instead wrangled by shining light into a liquid-crystal medium, guiding the resulting particles with that beam of light. Therefore, there is no need for the large, mirrored structure required in traditional applications.

The resulting wave—called a “soliton” by Strangi and the researchers—functions as a channel for the scattered photons to follow out, now in an orderly, concentrated path.

One way to understand how this works is by envisioning a light-particle version of the “solitary waves” that surfers (and freshwater-bound fish) can ride when rivers and ocean tide collide in certain estuaries, Strangi said.

Finally, the researches hit the liquid crystal with an electrical signal, which allows the user to “steer” the laser with a dial, as opposed to moving the entire structure.

That’s the big development by this team, Strangi said.

“That’s why we call it ‘transistor,’ because a weak signal (the soliton), controls a strong one—the laser output.” Strangi said. “Lasers and transistors have been the two leading technologies that have revolutionized the last century, and we have discovered that they are both intertwined in the same physical system”

The researchers believe that their results will bring random lasers closer to practical applications in spectroscopy (used in physical and analytical chemistry as well as in astronomy and remote sensing), various forms of scanning and biomedical procedures.